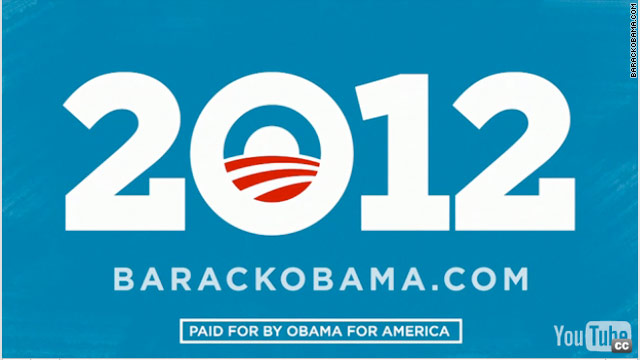 WASHINGTON (CNN) - With a short video on BarackObama.com, the sitting president of the United States has launched his bid for re-election.

A top Obama aide tells CNN the video is tailored to grassroots supporters to get them activated and engaged.

The familiar looking blue "O" over red and white stripes is back again for 2012. And at the bottom of the website, the candidates' names are clearly identified: OBAMA-BIDEN - for Vice President Joe Biden.

Shortly afterward, Obama sent an e-mail to supporters to say he will also file papers Monday with the Federal Election Commission.

"We've always known that lasting change wouldn't come quickly or easily. It never does. But as my administration and folks across the country fight to protect the progress we've made - and make more - we also need to begin mobilizing for 2012, long before the time comes for me to begin campaigning in earnest," Obama said in his e-mail message.

He is expected to host his first re-election fundraiser in Chicago on April 14, according to the sources. A top Obama aide also says the president will not discuss the beginning of his reelection efforts on Monday and the presidential campaign will remain "in the background" for several months.

"The president has a day job," the aide said.

Obama is kicking off his campaign slightly earlier than is typical for an incumbent so he can get a jump on fund-raising in a season that's likely to shatter all records.

By comparison, former President George W. Bush filed his reelection paperwork in May of 2003.

The video features Obama supporters from North Carolina, Colorado and Nevada - key battleground states that the president won in 2008 and hopes to hold this year. Obama never appears in the video. Instead it highlights different demographics: three women – white, African American, and Latina – all crucial constituencies for the president to win.

The president's support among white men has eroded, and the video features "Ed" from North Carolina saying, "I don't agree with Obama on everything" but adds he still supports him. But the president's team points to only one of the interviews on the video as particularly telling: a college age man who was too young to vote in 2008 says he plans to get involved this year; the campaign will make an aggressive effort to bring in more first time voters.

Obama's team has been asking campaign bundlers to raise $350,000 each, no easy task since campaign finance laws limit gifts to $2,500 per donor.

According to these sources, the president has made calls to top donors and conference calls are planned this week to supporters and key Democratic groups.

A top Obama aide adds the president plans to compete "in all states we did before" and shrugged off the party's poor showing in the midterm elections because many general election voters don't vote when a presidential candidate isn't on the ballot. The campaign will have a fight on its hands to hold some of the battleground states the President won in 2008 – including Florida and Ohio. One state the team believes could be in play in 2012: Arizona, which Obama lost by just 9 points despite the fact Arizona's own John McCain was the Republican presidential nominee.

Vice President Joe Biden is already planning to be in New Hampshire Monday and will meet with key supporters in that crucial early voting state.

For the past few weeks, Jim Messina, who will manage the campaign, and Patrick Gaspard, executive director of the DNC, have been flying around the country meeting with frustrated donors working to get them re-engaged.

So far no Republican contenders have formally announced. But these days, the likely Republican presidential contenders are making endless visits to key early voting states and meeting with supporters across the country.

Former Deputy Press Secretary Bill Burton and Sean Sweeney, former aide to then-Chief of Staff Rahm Emanuel, have been approached by Democratic donors who are concerned about countering the influence of Karl Rove and the Koch brothers in the upcoming 2012 election.