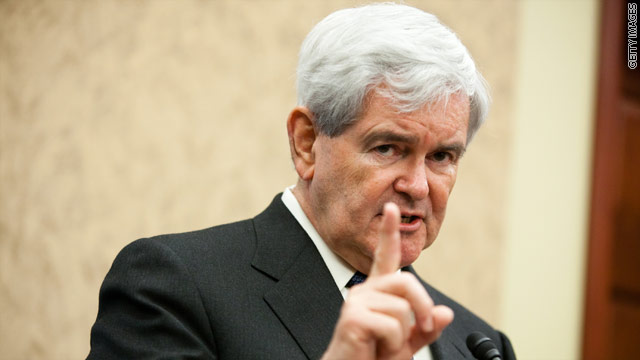 "Here's a president who 18 months before the election is going to use his office to extort contributions on a scale we've never seen before," Gingrich said in New Hampshire where he addressed the Institute of Politics at St. Anselm College in Manchester. "He's in effect trying to create a Chicago style machine for the whole country with a billion dollars."

President Obama launched his official reelection bid with a video Monday using the slogan "It begins with us" and sources told CNN Obama's campaign team hopes their bundlers will raise $500 million, leaving the campaign to raise another $500 million to amass a $1 billion war chest.

"It's not about us, it's about the money and it's about the president's ability to coerce and run over the American people by building a machine so big nobody can challenge him," Gingrich said.

But the former Republican House Speaker said Obama can still be beat.

"I don't believe he can raise enough money to hide from the American people," Gingrich said. "I believe in the end there will be a debate, in the end it will be clear in October of next year how big the difference is and I think frankly he'll be a one-term president."