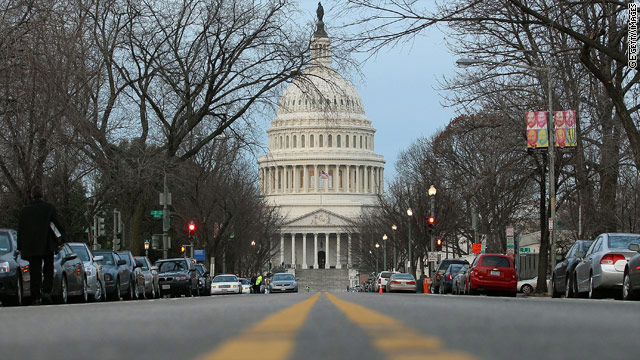 Washington (CNN) - Americans are divided over whether President Barack Obama or congressional Republicans would shoulder more of the blame if there's a government shutdown later this week, according to two new national polls.

A Washington Post poll released Monday indicates that 37 percent of the public says Republicans in Congress would be more to blame for a shutdown of some government services and offices, with an equal amount saying the Obama administration would be more at blame, and 15 percent saying both sides would equally shoulder the blame.

A Pew Research Center survey also released Monday has almost identical numbers. Thirty-nine percent of people questioned in the Pew poll say congressional Republicans would be more at blame, with 36 percent saying the Obama administration, and 16 percent saying both sides would be blamed.

The numbers in the Washington Post and Pew surveys are little changed from polls they conducted earlier this year.

The polls' release comes just a couple of days before current funding for the government runs out. If there is no budget agreement between congressional lawmakers by Friday, some government programs and offices may shut down.

Fifty-six percent of people questioned in the Pew poll say they want federal lawmakers to be more willing to compromise, even if it means they pass a budget they disagree with, while only 36 percent say members of Congress should stand by their principles, even if it leads to a shutdown.

The survey indicates a partisan divide, with half of Republicans saying lawmakers should stand by their principles. Meanwhile 53 percent of independent voters and nearly seven in ten Democrats say lawmakers should compromise to prevent a shutdown.

The Washington Post poll indicates that by a two to one margin, Americans say the Republicans in Congress are playing politics rather than honestly trying to solve the budget impasse. By a 51 to 43 percent margin, the public feels the same way about the Obama administration.

The survey suggests a growing disillusionment among Republicans, with four in ten now saying congressional Republicans are playing politics rather than trying to avoid a government shutdown. That's up 13 points from earlier this year.

The Washington Post poll was conducted March 31-April 3, with 1,008 adults nationwide questioned by telephone. The survey's overall sampling error is plus or minus 3.5 percentage points.

The Pew Research Center poll was conducted March 30-April 3, with 1,507 adults nationwide questioned by telephone. The survey's overall sampling error is plus or minus 3.5 percentage points.