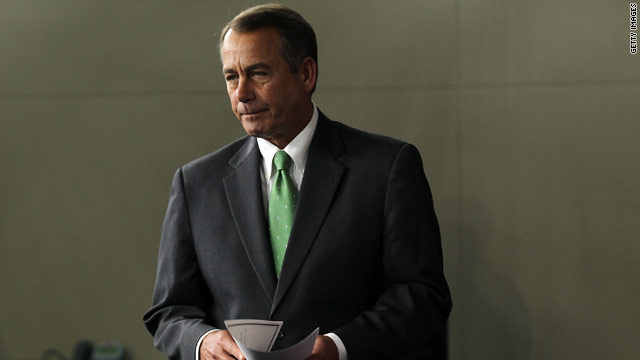 Boehner's emotional thank you to Republicans

Washington (CNN) - House Speaker John Boehner became choked up during a meeting with House Republicans Wednesday, according to several GOP sources in the room.

Two Republican sources said he became emotional when he expressed gratitude for GOP conference support over his decision to move ahead on another stopgap bill that would fund the government for an additional week. Those in the meeting then applauded the Ohio congressman, praise that CNN could hear outside the room.

Boehner is under pressure from Republicans over ongoing negotiations to avoid a government shutdown when the current continuing resolution expires Friday. More conservative members of the caucus, particularly those aligned with the Tea Party movement have turned up the heat, urging Boehner not to renege on pledged spending cuts.

Still, several Republican lawmakers – even those urging the Speaker to stand firm and not compromise on spending cuts – have said they appreciate the way Boehner is trying.

"What a lot of us have been trying to do is to encourage him to be bold," Rep. Joe Walsh, R-Illinois told CNN. "The healthy pressure we've put out there is to remind him of that, to be bold. He's doing everything he can to work this out."