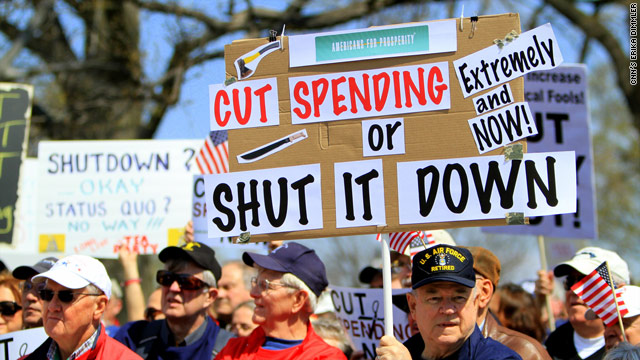 Washington (CNN) - As the clock ticks toward a government shutdown, Tea Party activists are turning up the heat. Hundreds of conservative activists rallied Wednesday near the steps of the U.S. Capitol chanting, "Shut it down."

"It's time for taxpayers to take back the government. And let's shut it down for a few days. It's not going to come to a catastrophic end," said David Williams with the Taxpayer Protection Alliance.

Indiana Republican Congressman Mike Pence was right there with them.

"If liberals in the Senate would rather play games in this process and force a government shutdown rather than accepting what is a small down payment on fiscal discipline, then we should just shut it down," Pence said.

But Minnesota Republican and Tea Party favorite Rep. Michele Bachmann stopped short of calling for a shutdown, telling CNN she thinks a deal can be reached.

"I think we will see a resolution by Friday. I think in all likelihood it will happen," Bachmann said. But she acknowledged the current stalemate over a budget for this fiscal year is heading toward the brink.

"A lot of us are concerned," Bachmann said.

Even some of the Tea Party protestors are conflicted. Activist John Oltsevig was dressed as a Revolutionary War patriot and waving a sign that read, "Shut 'Er Down." But he said the sign was only symbolic.

"I don't want the government to shut down. I'm making a point," Oltsevig said. "We need to get serious about cutting our budget," he added.