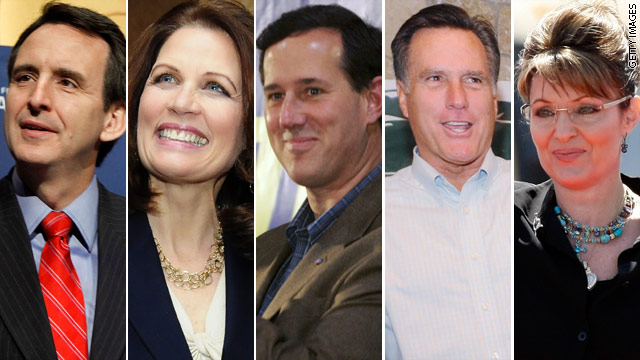 Where they stand: GOP hopefuls on government shutdown

Washington (CNN)-As the 2012 presidential race takes shape and the budget battle continues, some GOP nominee hopefuls are weighing in on the implications of a government shutdown, and some are keeping mum.

Of thirteen potential presidential candidates, two have expressed disdain for a possible shutdown and eight aren't afraid of it. Included in the eight are some candidates who support the result of a failed budget agreement, but with reservation. Several stayed out of the commentary fray.

Most possible Republican presidential contenders who support a government shutdown agree on its value as a political tactic, scary or otherwise.

Here's a breakdown of where they stand.

Rep. Michele Bachmann
Minnesota Rep. Michele Bachmann's announcement of a presidential exploratory decision is expected to come in June, but possibly earlier. She's been vocal in her opposition to the prospect of a government shutdown, telling Newsmax last month in an interview, "That's not going to happen. Because that won't serve anyone's interest."

But Bachmann asserted, "We need to be responsible adults and I don't think we should be caught into the liberals' trap of saying if we cut spending that that will equal government shutdown. Clearly, it won't. So let's take that off the table."

Gov. Mitch Daniels
GOP Gov. Mitch Daniels had his own budget battle to contend with in the state of Indiana, and notably said recently that he'd focus on resolving his state's issues with the budget bulge, even if it meant foregoing a 2012 presidential contest. He weighed in on the implications of a federal government shutdown from a state's perspective saying, "Government shutdown would be a bad thing for us all, it would be very disruptive and I hope we can avoid it," on PBS Newshour.

Herman Cain
Businessman Herman Cain, the first to declare his formation of a presidential exploratory committee, doesn't find much fault with the shutdown of government if it achieves necessary budget cuts. On CNN's "In the Arena" he said, "It is worth a government shutdown if it comes to that, yes. Now I'm not recommending that but it is worth it and here's why: the political dynamic in this country is changing. This is what this whole Tea Party citizens' movement, as I call it, is all about. They can't continue to tinker around the edges."

Railing against cuts that he doesn't believe go far enough, Cain said, "You've got to identify whole programs to cut out. That's the only way you're going to make some big changes in terms of what we have to get rid of. Just tinkering around the edges, taking a little bit here, a little bit there, that's not going to solve the problem that we face."

Newt Gingrich
Former Speaker of the House Newt Gingrich may or may not run for president, but he can't outrun his influence on the government shutdown in 1995. Judging from an op-ed that he penned for the Washington Post, he's not trying to.

"The Washington establishment believes that the government shutdown of 1995 was a disastrous mistake that accomplished little and cost House Republicans politically. The facts are the exact opposite," he stated.

Though some credit the bad press surrounding House Republicans' role in the 1995 government shutdown with then-President Bill Clinton's re-election rebound, Gingrich has a different view. "While the shutdown produced some short-term pain, it set the stage for a budget deal in 1996 that led to the largest drop in federal discretionary spending since 1969," he said.

"Another shutdown of the federal government is not an ideal result, but for House Republicans, breaking their word would be far worse. If it comes to a shutdown, the GOP should stick to its principles."

Mike Huckabee
Former Arkansas Gov. Mike Huckabee is still ensconced as an anchor with Fox News, but chatter surrounding another run for the GOP presidential nomination keeps him on top in recent polls, including last week's straw poll in South Carolina. While promoting his new book "A Simple Government" on CBS' "Early Show," Huckabee said a government shutdown may have to happen.

"It's a very different environment," he stated. "I think it could happen and maybe it has to because at some time either now or later the government is going to shut down either from bankruptcy in the future or from a targeted effect to try to get someone's attention that we're overspending and not managing at all."

And though he admitted a shutdown of government is "not good for anybody" in a later interview, he supports it as an attention-getting measure to show the "powers that be that America and the American people are done with government just playing the gimmicks of accounting and spending more money and saying 'we didn't have a choice.'"

Sarah Palin
Former Alaska Gov. Sarah Palin agrees that the threat of a government shutdown may be a "scare tactic," but asserted that Republicans "shouldn't be deterred" by the threat.

"It would force President Barack Obama to work with Republicans. Not necessarily would that be a bad thing on either side," she said, while addressing a group of business and civic leaders in Woodbury, New York. "There are a lot of people, though, who are saying, 'Shut her down, if that's what it takes.' Let it be for a week or two or three, this message that is sent to our politicians who are so tone deaf to what the people of America are saying."

The 12-term Congressman also made a prediction saying, "I think, when it gets down to the wire, they'll come up with something…Unfortunately the bipartisanship agreement will not involve much in the way of cuts because even the cuts that we've been talking about are so token that it has so little meaning but I may be wrong and maybe there'll be a shutdown and maybe we can blame the fed for all the problems." In short, Paul said that he doesn't welcome or fear a shutdown of federal government if both parties cannot agree on a budget.

Tim Pawlenty
Former Minnesota Gov. Tim Pawlenty, who announced the formation of a presidential exploratory committee in March, has shared differing views at different times. Pawlenty expressed the need for "dramatic" action to balance the federal budget in February.

In an interview with ThinkProgress.org he said, "We've got to get back to certain principles and responsibilities and starting with getting the budget balanced and if it takes a dramatic moment or a dramatic week or a dramatic month, those kinds of line-in-the-sand moments are what we need to get politicians back up against the wall and have them make the tough decisions."

But six years ago Pawlenty had different feelings when his own state faced a budget stalemate. The then-governor showed frustration in working with the Senate Democratic-Farmer-Labor (DFL) majority, stating, "I've been willing to compromise and lead. I hope that the Senate DFL won't lock state employees out of their jobs and hamper state government."

Calling the action a "cynical" political strategy, Pawlenty then felt that a partial shutdown of state government would "represent not just an inconvenience to Minnesotans, but a real challenge and concern."

When the special session concluded without a budget deal, Pawlenty described the resulting shutdown as DFL tactic used to embarrass him.

And in 2011 he changed tack stating, "If it came down to it and it was between that and not getting the budget headed in the right direction, that's an option I think Republicans have to consider," showing distinctly opposite opinions when it comes to state vs. federal politics.

Buddy Roemer
Another GOP candidate, who announced an exploratory committee in early March, praised the use of a government shutdown as political strategy, though he's not a fan of it overall. Former Louisiana Gov. Buddy Roemer told CNN in March, "I don't like that, but sometimes you have to be skilled at pointing out what could happen if we don't have some action. I wouldn't be a Republican who said we have to cut $100 billion from the budget or we'll shut the government down." He scoffed at some Democratic response toward Republican proposals saying, "They would like to see out of a $3.5 or $4 trillion budget some progress toward balancing the books, and the Dems are gagging on $6 billion? I mean, please."

Rick Santorum
At an event in Iowa former Pennsylvania Sen. Rick Santorum encouraged Republicans to "pick a fight" over the budget. "We need to learn the lesson that 2011 is not 1995." Though he disagrees with Gingrich, believing that fallout from the government shutdown in 1995 did hurt Republicans in the following year's presidential election, Santorum said, "I think we're in a better atmosphere to pick a fight and draw a line," according to Politico.

Others
Real-estate mogul Donald Trump, who has been flirting with a 2012 run, refused to comment on the potential for a government shutdown when contacted. Mississippi Gov. Haley Barbour and former Massachusetts Gov. Mitt Romney did not respond to requests for comment.