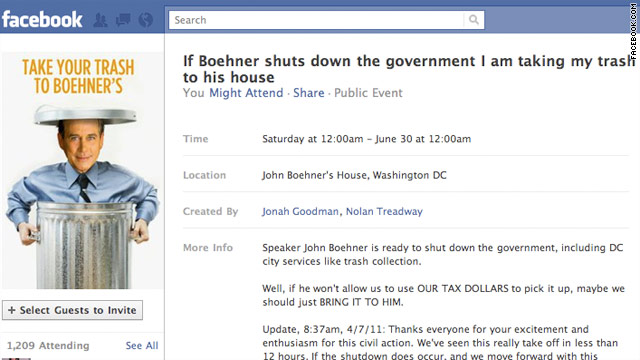 Washington (CNN) - If the federal government shuts down come Friday, House Speaker John Boehner may be in for quite a mess at his Washington, D.C. residence if some Facebook users have their way.

A Facebook event, entitled "If Boehner shuts down the government I am taking my trash to his house," has popped up and is gaining steam as the shutdown showdown ramps up on Capitol Hill. If the federal government shuts down, one of the District's services that will stop is trash pickup.

"Speaker John Boehner is ready to shut down the government, including District of Columbia city services like trash collection," it says on the page. "Well, if he won't allow us to use OUR TAX DOLLARS to pick it up, maybe we should just BRING IT TO HIM."

The trash-a-thon is scheduled for Saturday and apparently will last through June 30.

Organizers of the event - Jonah Goodman and Nolan Treadway - write on the page that even if the government shutdown doesn't occur, they will "move forward with this event, we'll provide details on location(s) and we'll make sure it's done in a sanitary and respectful way. Please don't list any personal addresses for members of Congress on this page."

Goodman is listed in the Democratic National Committee network. Treadway is the political and logistics director for the liberal group Netroots Nation.

House Speaker Boehner's spokesman Michael Steel did not comment to CNN on the group. But he said that "The Speaker has made clear that he wants to cut spending and keep the government open. The House will pass yet another bill to that this afternoon. If the government does shut down, these folks should focus their ire on the Democrats who are actively rooting for a government shutdown, hoping for partisan gain."

Reaction on the page is, like Washington, all over the place.

Amy Lysander: "Do you plan on trashing the yards of the Democrats who are actually causing a shutdown? The House passed a bill to keep the government open. Two of them, actually. The Senate hasn't. Where's Harry Reid's house?"

Diane C. Russell: "Dems controlled Congress completely for 11 months after Obama submitted FY 2011 budget, but FAILED to do their duty and REFUSED to pass any appropriations, either before or after the beginning of the fiscal year."

Brian Devine: "I'll bring some styrofoam from the Hill caf."

Darrin Morgan: "Darn! I just cleaned out my garage. Oh, well. I have some rotten fruit I can throw at the Weeper of the House."