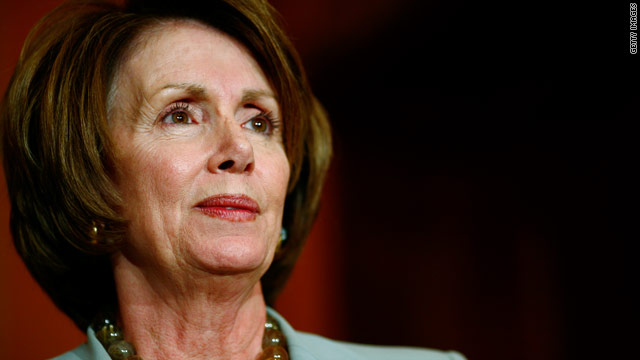 "There is actually a war on women," the minority leader told several hundred activists attending the Women Money Power Summit sponsored by the Feminist Majority Foundation. "Abortion is one issue but contraception and family planning and birth control are opposed by this crowd too. Understand what is at risk here," Pelosi said, referring to proposals promoted by the new House Republican leadership.

Pelosi identified three bills pending before Congress which she said take aim at women. One, HR-3, would restrict women's access to abortion and eliminate federal funds for abortion in all circumstances. A second, the stop gap spending measure passed Thursday by the House, would eliminate funding for Planned Parenthood, including for health checks for sexually transmitted diseases. And the third, the House Republicans' proposed budget for next year, would completely overhaul Medicare and Medicaid. Pelosi argued that proposal will end Medicare altogether.

"This is not reform. This is the same old ideological turn back the clock for women- end Medicare, end Medicare. Are you ready for that?" Pelosi asked the crowd.

When asked for comment, a spokeswoman for the Republican National Committee dismissed Pelosi's remarks as obstructionist. "These are more scare tactics and demagoguery from Democrats who are trying to distract from the serious conversation Republicans are having about our unsustainable budget. They weren't willing to have the conversation when they controlled the entire federal government and they are continuing to attempt to obstruct it now," said RNC spokeswoman Kirsten Kukowski.

Republicans argue that they are advocating painful cuts now to save programs for the future. When he unveiled his proposed budget earlier this week, Republican Budget Committee Chairman Paul Ryan said, "We owe it to our country, to our kids to fix this problem."

The House Republican budget would convert Medicare from a fee-for-service program into a "premium-support" system for anyone under 55 today. When those individuals become seniors, they would choose from a Medicare-approved list of private insurance plans and the cost of that plan would be partly subsidized by the federal government. The Republican proposal would also gradually raise the age at which an individual is eligible for Medicare from 65 to 67 by the 2030s.

The women's vote will be key in next year's election, and analysts expect a battle for their allegiance. Since 1984, according to CNN exit polls, women have been a majority of voters in both presidential and congressional mid-term elections. By a 56 to 43 percent margin, the female vote in the 2008 presidential race went to President Barack Obama while in the 2010 midterm elections women voted for Republicans by a 49 to 48 percent margin for the House - helping them to re-gain the majority.

Pelosi urged the assembled activists to get involved ahead of the 2012 elections insisting the stakes are high.

"We have a big fight on our hands, in terms of respect for women, and our, what is right for our country in terms of our family decisions, in terms of Medicaid and Medicare," she said. "We have to create a drumbeat across America."