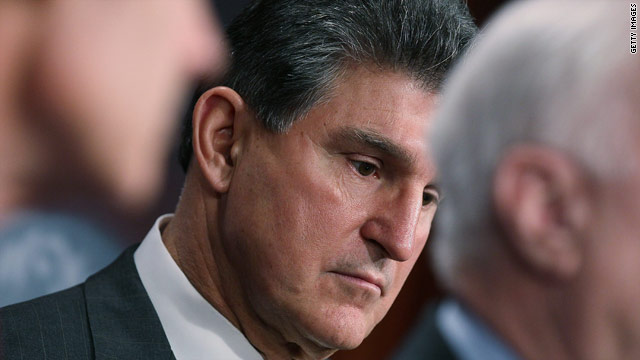 Senator urges lawmakers to give up pay if there's a shutdown

Washington (CNN) - Sen. Joe Manchin of West Virginia says he'll forgo his pay if there's a federal government shutdown, and he's urging his colleagues in Congress as well as the president and vice president to join him in voluntarily giving up their salaries.

"While millions of American families will be impacted by a government shutdown- whether they are serving our country's military, whether someone in their family is furloughed or whether they are unable to use critical government services – elected officials are the one group who will not be impacted. Just the opposite, in fact: we still get paid," says Manchin, in a letter circulated to fellow lawmakers. "How does that make any sense?"

Manchin, a Democrat and former popular two-term governor of West Virginia, won a special election last November to fill out the last two years of the term of the late Sen. Robert Byrd. Manchin could face a potentially challenging re-election bid in 2012, when he will seek a full six year term. In his first three months in office, Manchin has been effective in grabbing headlines for voting at times against his party.

Manchin says his move is not about politics: "Some in Washington will deride this as an empty gesture. To those naysayers, I say that the American people expect more of us. They expect us to lead by example and share their pain until a budget resolution is reached that reflects our values and priorities as a country."

"This is nothing short of pure political posturing by multi-millionaire Joe Manchin to cover up for the fact that he and his fellow Washington Democrats have failed to do their jobs," said National Republican Senatorial Committee Communications Director Brian Walsh, in a statement Thursday morning.

Early last month the Senate voted unanimously to pass a bill that would ban members of Congress and the president from getting paid during a government shutdown. But the House did not take up that legislation.

The 27th Amendment to the U.S. Constitution prohibits lawmakers from altering their pay during the same Congress in which they vote on such a pay change. But Manchin's pledge avoids the constitutional issue, as it doesn't include changes to lawmaker's salaries.

"I will forego my federal salary until we reach an agreement. I will donate my salary to charity or return it to the Treasury until the government works again," says Manchin.