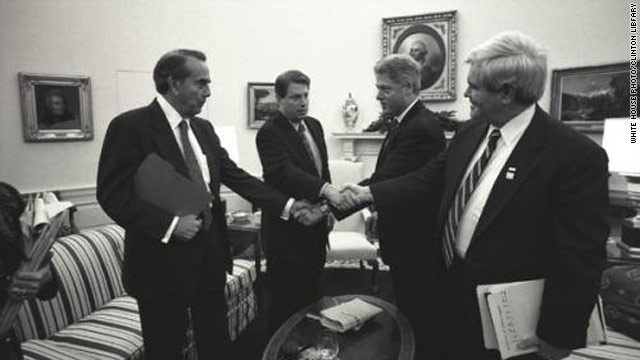 Been there, done that: Gingrich's shutdown insight

"I think there are a lot of people who are tired, and really focused on trying to figure if they can avoid having a shut down," Newt Gingrich said on Friday to reporters regarding round-the-clock negotiations. His comments came after he delivered a speech at The Awakening conference at Liberty University.

"But they also realize that there are principles involved and they can't – I think on the Republican side it would be very, very hard to accept anything less than significant, very significant cuts in spending," Gingrich added.

In 1995, House Speaker Gingrich and Republicans controlling the Senate clashed with President Bill Clinton over the federal government, forcing a shutdown.

Gingrich told reporters he's optimistic that both parties might avoid the same fate, saying, "I think it's possible they'll get to an agreement this afternoon."

And yet, he also warned of the potential peril of one option that Democrats and Republicans chose during the last shutdown showdown.

"I think it's possible that they could try to keep the government open on a rolling basis for three days at a time. But when we tried to do that in '95, it turned out to be impossible to manage after awhile," Gingrich said.

"This could be the beginning of a very long, rocky period," he said.

Gingrich is currently considering a presidential bid, having formed a presidential exploratory committee and saying he will make a final decision about a bid in May.

But if here were currently president, he was asked, what would he do to spare the nation the same event that happened under his watch as speaker?

"First of all, I would have tried to be involved like, a month ago, two months ago," Gingrich said in an apparent slam against President Obama.

"I would have tried to work it out long before you get to this mess. Second, I would try to find a compromise to keep the government open."