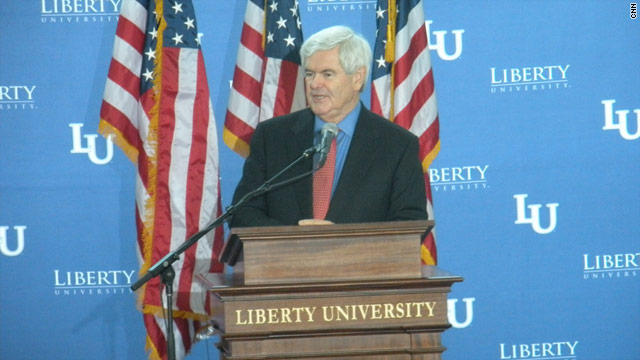 "Let's be clear," Gingrich said during a speech at Liberty University Friday. "President Obama is deliberately seeking to hold the men and women in uniform hostage so the politicians can fight over the budget and use the threat of not paying the troops their weapon."

Gingrich's comments are in reference to the president's pledge Thursday to veto a Republican-backed spending bill that aimed to cut spending by $12 billion and fund the Pentagon for the remainder of the current fiscal year. The president and Democrats opposed the measure because of the programs it would cut, including a provision that would prevent Washington, DC taxpayer money to be used to fund abortion providers.

The president called the GOP bill a distraction while House Republicans said Democrats are deliberately putting U.S. troops at risk.

"You would think that the President of the United States as commander-in-chief, who has just committed to us to our third war on his term, would have some concern for the men and women and their families who are serving America," Gingrich added. "But that's not the case."

According to the Department of Defense, a government shutdown would likely halt paychecks to the majority of military personnel, but those who are on active duty will be compensated once an agreement has been reached.

Gingrich is headlining Liberty University's "Awakening Conference," a two-day gathering which, according to the Lynchburg, Virginia school, will address such topics as "abortion, the economy, religious liberty, marriage and homosexuality, Sharia Law, the Middle East, Human Sex Trafficking, Reaching Minority Communities and Using New Media and Technology to Power a Movement."

Gingrich, who is seeking to burnish his credentials with the evangelical community as he mulls a presidential run, last appeared at the religious school founded by the late Rev. Jerry Falwell in October.