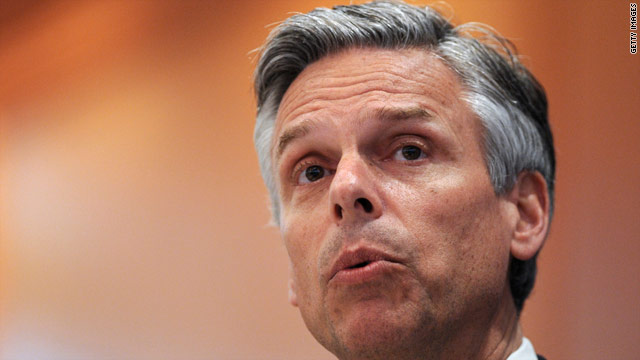 Huntsman heading to South Carolina in May

Greenville, South Carolina (CNN) - Ambassador to China Jon Huntsman, a potential candidate for the Republican presidential nomination, will deliver a commencement address at the University of South Carolina on May 7, a university spokeswoman confirmed Friday.

It's Huntsman's second scheduled appearance in an early presidential primary state: the former Utah governor is also slated to deliver the commencement address at the University of Southern New Hampshire on May 21.

The speech to graduates of USC's Honors College and College of Arts and Sciences places Huntsman in the Palmetto State on the same week as the first GOP presidential primary debate, scheduled for May 5 in Greenville, as well as the South Carolina Republican Party's annual convention in Columbia.

But a source close to Huntsman's potential presidential campaign told CNN that it's unlikely he will participate in the debate. The source said, though, that no final decision will be made until he returns from China. Huntsman's stint as ambassador concludes on April 30.

If Huntsman does seek the GOP nomination, he will have a team in place in South Carolina, one of the first four states on the presidential primary calendar.

Longtime GOP strategist Richard Quinn, who steered Sen. John McCain's two presidential campaigns in South Carolina, is working for Huntsman's political action committee and has said he will support Huntsman if he runs.