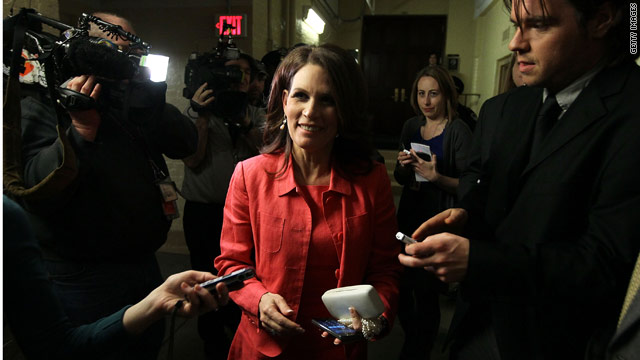 Washington (CNN) - Minnesota Rep. Michele Bachmann took to the stage in the key state of Iowa on Monday, telling the audience that the best strategy for blocking liberal policies is to defund the left.

The Republican congresswoman, who is eyeing running for the GOP presidential nomination, told a Pella, Iowa crowd, "What we need to do is expose these policies that we see on the left, expose them, and then number two, defund them."

"People across the nation have told me since Friday how terribly disappointed they are in the final budget deal that we have because they expected so much more from us and so do I," Bachmann said. "And that's why we have to remember, we will never win if we don't fight."

Bachmann spoke as part of a presidential lecture series sponsored by the Family Leader, an Iowa organization whose two top issues are same-sex marriage and pro-life, two topics the she focused on in her speech.

The Minnesota Republican, who has advocated for complete defunding of Planned Parenthood, referred to the group as a $1 billion organization bent on becoming the "Lens Crafters of big abortion."

Bachmann highlighted the "power of the purse" held by the Republican-led U.S. House. "Barack Obama gets no money, zero money unless we give it to him. So he can be held hostage," she said.

Bachmann proposed abolishing the U.S. Department of Education and the U.S. Environmental Protection Agency, which she said has "drifted from their focus on conversation, of clean air and clean water." Bachmann told reporters after her speech that the Department of Energy and the Department of Commerce are other organization she would eliminate, according to the Des Moines Register.

Bachmann spent the beginning of her forty-minute speech describing her path to spiritual enlightenment as a sixteen-year old and took the opportunity to remind the audience of her Iowan roots, "Some of you may know that I am an Iowan," Bachmann said, telling the crowd an "Iowegian" is a "Norwegian Iowan."