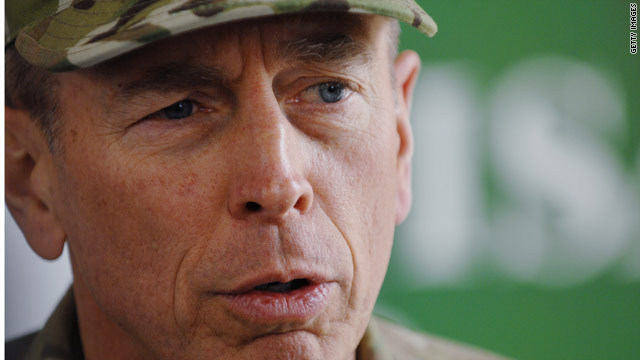 The move would be just one of a complex shuffle set to take place through the rest of the year as key members of the president's national security team are set to depart, including Secretary of Defense Robert Gates who has long wanted to retired, and The Chairman of the Joint Chiefs of Staff Adm. Mike Mullen, whose term is set to end this year.

The current director of the CIA, Leon Panetta, is one of the people high on the list to replace Gates as defense secretary, the official said.

"There is a lot of chatter and a lot of speculation out there right now about what General Petraeus may do in the future. And all of it is premature and thus we aren't commenting," said Petraeus' spokesman Col. Erik Gunhus told CNN.

Its extremely unusual for a military officer to publicly acknowledge he may even be in contention for a Presidential appointment. However, speaking to reporters over the weekend Petraeus took the highly unusual step of doing just that.

"Well, again, it's probably not appropriate for me to comment on whatever might be considered down the road. I've had discussions, but again, it wouldn't be appropriate to comment," Petreaus told reporters in Kabul when asked about the possible CIA nomination.

CNN has spoken to several Administration officials in recent days and none would speak on the record. While no one is confirming any personnel decisions it appears the potential front runners for the Defense Secretary post include Panetta; Navy Secretary Ray Mabus and former Deputy Defense Secretary John Hamre. Other names mentioned include Michelle Flournoy the current undersecretary for policy. Several officials say the Obama Administration might be interested in appointing the first female defense secretary but its not clear Flournoy has the political skills for the post.

Until a few months ago there had been a lot of speculation inside the Pentagon that Secretary of State Hilary Clinton might be tapped, but she has been adamant that she does not want to hold another Administration job.

The Gates departure is expected this summer, just before Admiral Michael Mullen's term as chairman of the Joint Chiefs of Staff is set to expire in September. Mullen's deputy, Marine Corps General James Cartwright had been widely seen as the front runner. Cartwright is said to have a very good relationship with President Obama that has taken root outside the public arena, according to numerous officials. He has become a key advisor to President Obama on emerging threats such as cyber war, and advises on some highly classified military intelligence programs as well as on missile defense.

But Cartwright is said to have a cool relationship with Mullen, according to numerous officials, and its not clear if he has Mullen and Gates support him for the job. A military officer close to Cartwright also confirmed that the general and his wife have recently informally separated but insisted it had nothing to do with a Defense Department inspector general report critical of Cartwright for allowing an intoxicated female Marine to nap in his hotel room. Cartwright was cleared of any wrongdoing or poor judgement in the matter.

Petraeus also has been mentioned as a candidate to become the next chairman, if he does not go to CIA. Another contender military officials say is Admiral James Stavridis, the current Supreme Allied Command Europe, though its not clear the White House would appoint another admiral to succeed Mullen to the top military post.