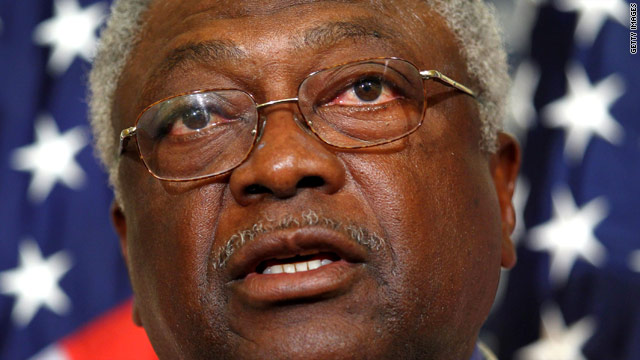 Clyburn: Obama to focus on revenues

Washington (CNN)– Democratic Rep. James Clyburn, the assistant minority leader, suggested Monday that revenue issues will be a focus of the debt plan President Barack Obama will lay out on Wednesday.

Preparing for the upcoming debt-ceiling drama, Clyburn, who in 2009 introduced the Access for All Americans Act, which sought to increase the number of community health centers and provide medical care to low-income patients, said he does not plan to vote on eliminating health care reform and vows to look at the proposed bill in a comprehensive way.

"We should not go back to discriminating against people with preexisting conditions and to getting people kicked off their health insurance policies as soon as they get real sick. That's not what a compassionate government ought to be about," Clyburn said.

Republicans have signaled a willingness to exchange their support on raising the debt ceiling for concessions in health care and environmental policy, but Clyburn
stressed the importance for ongoing talks not to stray far from the pivotal issue at hand. The congressman said that now is not the time for ideological debates such as abortion that "have no place being tied to budget talks."

"None of that should be tied to the budget. We should be working on getting people back to work. Here we are, one hundred days now come April 14th and they have not brought forth one single job-creating piece of legislation," Clyburn said. "So that's what we ought to be doing here. People don't want us arguing over what should or should not be their moral underpinnings."

Congress must find an agreement in mid-May before the United States reaches its legal borrowing limit of $14.29 trillion. Even though the U.S. isn't going "gangbusters" yet, Clyburn is optimistic that there is enough bipartisan support to eliminate the deficit, as he helped do during the Clinton administration.