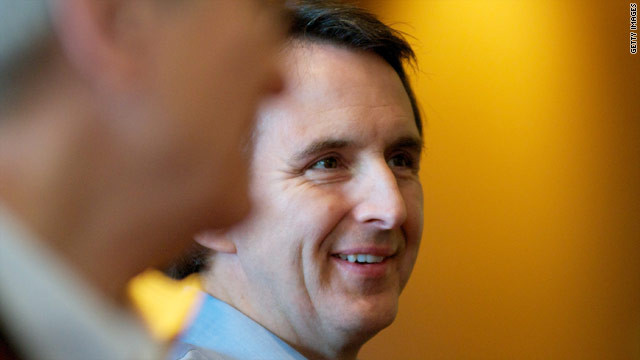 Washington (CNN) - In what's being seen as a major score for Tim Pawlenty, the former Minnesota governor has signed up a leading Republican strategist.

"We are very excited Nick will lead our team. His leadership and record of winning tough races in every part of our country will provide even more momentum to our campaign to get America back on track," Pawlenty said in a statement Monday morning.

Ayers steered the RGA in the 2008 and 2010 election cycles, helping the organization break fundraising records. Pawlenty was vice-chairman of the RGA during much of the past cycle. The RGA chairman last cycle, Mississippi Gov. Haley Barbour, is also seriously considering a bid for the GOP presidential nomination.

"My decision to join the Pawlenty campaign is in total affirmation of Governor Pawlenty's record as a conservative, two-term governor of a blue state, his character and principles and his vision for this Nation, which is second to no one running for president," Ayers said in a statement.

Word of Ayers' hire was first reported by Fox News. The 28 year-old Ayers, who will move to Minneapolis, Minnesota and take over his new position on April 25, was sought after by a number of Republican presidential campaigns.

"My decision does not mean I think less of Haley Barbour, Jon Huntsman, Mitch Daniels or Newt Gingrich should they decide to run, because I do not. I know them all personally and believe in their intellect, capabilities, and principles," Ayers added.

While ranking low in national polling of Republican voters, Pawlenty has been very effective in building a strong team of advisers and strategists both based in Minnesota and in some of the crucial early-voting states in the presidential primary and caucus calendar.

The Ayers announcement comes as Pawlenty spends Monday in another important state in the road to the White House, Florida. Pawlenty is holding finance meetings as he builds up his fundraising efforts.

Pawlenty formed a presidential exploratory committee last month and is expected to formally announce his presidential bid in the coming weeks.