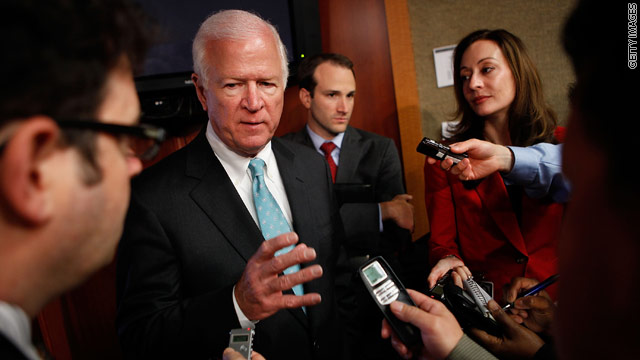 Republican Saxby Chambliss of Georgia and Democrat Mark Warner of Virginia said the pitch from their so-called Gang of Six bipartisan group would come soon, and warned their colleagues and constituents to expect proposed changes to two hotly contested issues - taxes and entitlement programs.

"Neither side's got all the answers in this debate," Warner said. "The idea that we can do this on simply one side of the balance sheet - well, it's just a spending problem, no, it's just a taxing problem - isn't the case. If we're not looking at both sides of balance sheet we should not even start this discussion."

At a town hall meeting at the Rotary Club of Atlanta, Chambliss and Warner laid out in broad strokes some ideas being discussed by the group. The other members are Republicans Tom Coburn of Oklahoma and Mike Crapo of Idaho and Democrats Richard Durbin of Illinois and Kent Conrad of North Dakota. They have been meeting on average twice a week since January to hammer out a plan, which takes into account recommendations of the president's debt commission, which released its findings late last year.

Their goal is to reduce the deficit by $4 trillion over 10 years, which is what the president's commission recommended

The senators said their plan would continue to reduce discretionary spending and reform the entitlement programs Medicare, Medicaid and Social Security, though changes to Social Security would not affect Americans currently over the age of 32. Warner said one idea would gradually raise the retirement age.

Chambliss took the lead on the issue of income taxes.

"Our tax code has gotten way out of kilter," he said.

Chambliss said the group was discussing lowering personal and corporate income tax rates to between 8 and 29 percent, but eliminating most tax deductions.

"Some of you are scratching your heads, saying gosh, that means mortgage interest deduction, charitable deductions, all corporate deductions and that's right," Chambliss said, explaining the plan would allow a taxpayer to apply for a deduction in exchange for paying a slightly higher tax rate.

"Every time you add one of those tax expenditures back, you gotta pay for it," he said.

Chambliss also called for reducing the corporate tax rate to increase competition for companies with international operations and encourage their expansion in the U.S.

The two senators called a budget proposal by Republican House Budget Chair Paul Ryan of Wisconsin "a serious plan" but faulted it for not addressing taxation and for not solving the deficit problem quickly enough.

"What he seeks to do is to, number one, balance the budget over about a 10-year period simply by reducing spending," Chambliss said. "And you can't do that. It's not going to work."

The senators painted a dire picture, both of the country's economic status and of the bitter partisan divide in Washington.

Warner said the Gang of Six would release details of their plan as soon as possible.

"I think our window is closing," he told Rotary Club members. "I think we're literally talking within 30 days or even sooner. Because you know, if not, people are going to default back. There'll be the Democratic plan, the Republican plan."

Both men said they had been in touch with the White House and would take into account the president's proposals, to be announced Wednesday. Though the group does not intend to reveal their plan this week, they hope once they reach an accord on the issues it will have a good chance of swaying other members of the Senate.

"The details are very difficult to agree to among the six of us, and trying to get 60 folks on board with it is not going to be easy," Chambliss said. "But at the end of the day, if the six of us are able to agree, when you look at the philosophical divide that exists between some members of our group, we hope that we can bring liberals, conservatives and moderates together and generate 60 votes."

Both senators acknowledged it is not going to be easy – that whatever they come up with will anger both parties.

Warner also said he believes that just the fact that a group of senators from opposite sides of the political spectrum with very different philosophies will introduce a bipartisan plan, will "energize this economy like nothing we've ever seen."