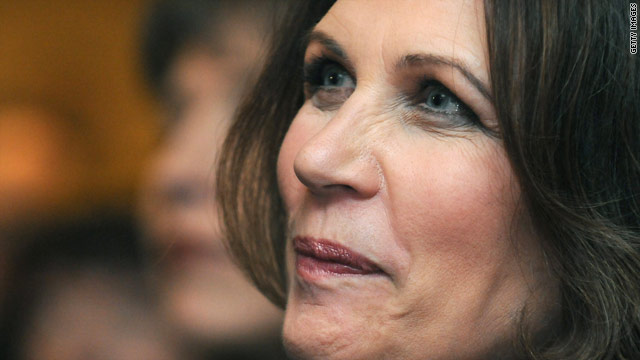 Washington (CNN)– Rep. Michele Bachmann was heckled by a handful of University of Iowa students at an appearance in the Hawkeye state on Monday.

The Minnesota Republican spoke for under thirty minutes about her opposition to abortion, same-sex marriage, and concerns with national debt, at the university memorial union in Iowa City, according to the Des Moines Register.

Bachmann was interrupted by the students who held a sign reading, "Homosexuality Desensitization" and shouted questions.

In addition, senior Jenny Watkins, grilled the congresswoman after the speech during the questions and answers portion. The student asked Bachmann about her views on homosexuality and abortion. Bachmann condemned both, according to the Des Moines Register.

The congresswoman, who is eyeing the Republican presidential nomination, addressed other socially heated topics at an earlier speech on Monday, in Pella, Iowa.

"I want to have a lot more than what we have now," Bachmann said. "The difference is, I don't want oil coming from the Middle East. I want it coming from the United States," the Des Moines Register reported.

Touting Iowa's agriculturally-rich industry, Bachmann pledged her support for energy sources that can be produced in the U.S. including wind, solar, biofuels, and natural gas.

The organization will bring Rick Santorum to speak at the University of Iowa campus in May.