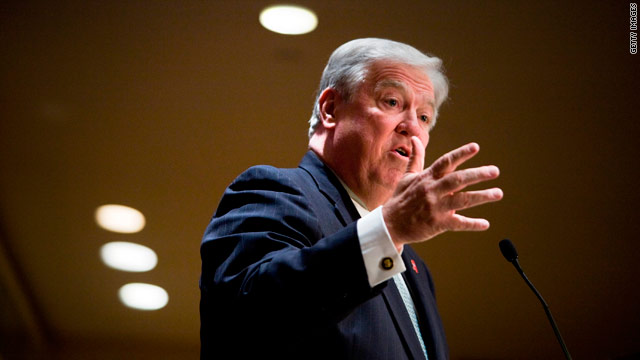 "I wouldn't read too much into that in all candor," Barbour told Chris Ryan on WKXL Radio Tuesday. "For some voters it may have just been that pure and simple, I've heard of Donald Trump, nobody else I've heard of I want to be for. So I'll just park my vote for this little poll with Donald Trump."

The Republican Mississippi governor will visit the first-in-the-nation primary state Wednesday and said voters will pay more attention as the nominating process progresses.

"Voters will start paying more and more attention and they'll get to know more and more candidates," Barbour said. "At the end of the day, they will make decisions based on candidates they know, not just the idea of here's some poll and where do I want to park my vote today."

In a new CNN/Opinion Research Corporation Poll released Tuesday, Trump and former Arkansas Gov. Mike Huckabee tied for first when Republicans were asked who they would support for the 2012 GOP presidential nomination.

But when asked what differentiates him from other potential candidates, Barbour touted his past roles including time spent as a lobbyist, his history as governor of Mississippi and particularly his leadership in the aftermath of Hurricane Katrina.

"In the United States today we face a different kind of crisis," Barbour said. "We need somebody who in a plain spoken common sense way gets results… in improving our economy, in regaining our stature in the world and that having been through what my state and I went through with Katrina is a very important lesson in the skills that are required to do that."