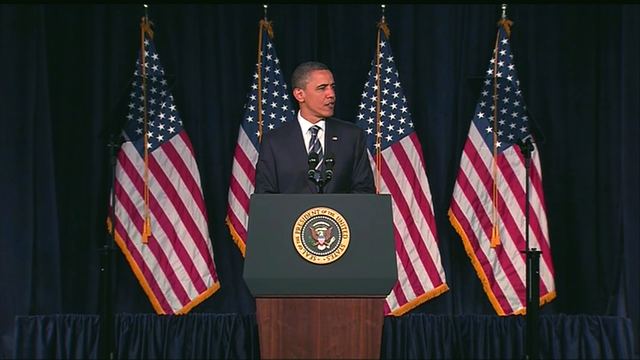 Washington (CNN) - President Barack Obama entered politically tricky territory Wednesday when he outlined his plan for reducing long-term deficits and the national debt amid a climate of tense budget negotiations in a speech at The George Washington University. Follow the latest developments with below with the Ticker's live blog. Read the full story here.

3:40 p.m. ET - @BarackObama: There’s nothing serious about a plan that claims to reduce the deficit by spending $1 trillion on tax cuts for millionaires & billionaires.

3:21 p.m. ET - House Speaker John Boehner responded to the president's speech with a statement Wednesday: "Republicans, led by Chairman Ryan, have set the bar with a jobs budget that puts us on a path to paying down the debt and preserves Medicare and Medicaid for the future. This afternoon, I didn’t hear a plan to match it from the President," Boehner said. “He is asking Congress to raise the debt limit to continue paying Washington’s bills. The American people will not stand for that unless it is accompanied by serious action to reduce our deficit. More promises, hollow targets, and Washington commissions simply won’t get the job done."

2:30 p.m. ET - Obama said the current debate is about the size and role of government. He added that “it's not a bad thing” that debate has gotten more vigorous, but that America has always believed we can’t just think about ourselves but must think about our country and fellow citizens and what is required to pursue American dream for future generations.

2:29 p.m. ET - Obama called on Vice President Joe Biden to begin regular meetings with leaders in both parties of Congress to come to an agreement on a plan to reduce the deficit by the end of June. He said while he doesn’t think the final agreement will look exactly like the approach he pitched today, he is “eager to hear other ideas from all ends of the political spectrum.”

2:26 p.m. ET - Obama's message to those who think we shouldn't make any reforms to Medicare, Medicaid and Social Security: Then “we wont be able to keep our commitment” to the next generations of retirees, Obama said. And his pitch to progressives in his own party: “We have the obligation to prove that we can afford our commitments.” He said we must make government “smarter, leaner, and more effective.”

2:23 p.m. ET - Obama said there will be those who disagree with his call to raise taxes on the wealthiest of Americans. As he did in the 2008 campaign, he cited his friend billionaire Warren Buffett, who Obama said, “doesn’t need another tax cut.” He added that he believes “most wealthy Americans would agree with me.” He said they want to give back, but “Washington hasn’t asked them to.”

2:20 p.m. ET - Obama said step four of his plan is to reduce spending in the tax code. He said he agreed to extend the Bush tax cuts because it was the only way he “could prevent a tax hike for middle class Americans.” Today he said we can’t afford it. “I refuse to renew them again.”

2:19 p.m. ET - Obama said he will preserve Medicare “as a promise we make” to each other in this society. He said Social Security faces challenges but is not the cause of the deficit, saying we must reform the program without affecting present retirees or "slashing benefits” for future generations.

2:17 p.m. ET - Obama said the third step of the plan is to further reduce health care spending in budget. He said the “difference could not be clearer” between his plan and the Republican plan. Obama said health care reforms already passed from his health care legislation would reduce $1 trillion from the deficit. He said we will change the way we pay for health care with new incentives for doctors and hospitals.

2:16 p.m. ET - Obama said his second step is to find additional savings in the defense budget, and cited comments from the Chairman of the Joint Chiefs who said, “the greatest long-term threat to America’s national security is America’s debt.” Obama pledged to conduct a fundamental review of America’s missions, capabilities and role in a changing world.

2:13 p.m. ET - Twenty-five minutes into his speech, Obama addressed his proposal for “a more balanced approach to achieve $4 trillion in deficit reduction over twelve years.” He said the first step is to keep domestic spending low. “We will make tough cuts” necessary to make these savings, he said, adding that he will invest in new roads, education, job training and clean energy.

2:11 p.m. ET - In the last decade, Obama said the bottom 90 percent of Americans saw a decline while the top Americans saw an increase. Using himself as an example, he said it was not right for him to get a tax increase on the backs of 33 seniors each having to pay more for health costs to finance a tax cut for the wealthy.

2:10 p.m. ET - Obama said Medicare plans floated by the GOP mean Americans would pay $6,400 more if you need healthcare, ending "Medicare as we know it,” Obama said. He claimed 50 million Americans will be without health insurance if the Republican plan goes forward. These Americans, he said, will be left to “fend for themselves.”

2:09 p.m. ET - Obama cited China, South Korea, and Brazil as examples of nations that are investing in the future and said the United States is not.

“We are presented with a vision that says the United States of America – the greatest nation on Earth – can’t afford any of this,“ Obama said.

2:07 p.m. ET - 2012 reference: Obama noted one vision championed by Republicans and “embraced” by several Republican presidential candidates aims to reduce the deficit by $4 trillion over the next 10 years, and addresses challenges of Medicare and Medicaid.

“Those are both worthy goals for us to achieve," Obama said. But the way this plan achieves those goals would lead to a fundamentally different America than the one we’ve known throughout most of our history. “

2:05 p.m. ET - Obama said truth is that two thirds of the budget is spent on Medicare, Medicaid, Social Security and Defense. He said clean energy, education, the environment and other programs only account for 12 percent of the budget. Any serious plan will require America to put everything on the table and take on excessive spending, he said.

2:03 p.m. ET - Obama said the good news is that a debt laden country doesn’t have to be our future. He said we can come together, but we need to be honest about the causes of the debt. Obama added that not all government spending is bad.

“Most Americans tend to dislike government spending in the abstract, but they like the stuff that it buys,” he said.

2:02 p.m. ET - Obama claimed by 2025, the amount of taxes we take in will only be enough to pay for health care, Social Security, and the interest we owe on our debt. “That’s it. Every other national priority – education, transportation, even national security – will have to be paid for with borrowed money.”

1:59 p.m. ET - While Obama didn’t name former President George W. Bush by name, he managed to sneak in a reference, saying by the time he took office, the projected deficit was more than $1 trillion.

1:58 p.m. ET - Obama said America lost its way after the fiscal discipline of the 1990’s. He said we didn’t pay for new spending of two wars and tax cuts that forced us to borrow an average of $500 billion every year over next decade.

1:57 p.m. ET - Obama referenced former President George H.W. Bush and former President Bill Clinton by name, but not former President George W. Bush. “To meet this challenge, our leaders came together three times during the 1990s to reduce our nation’s deficit. They forged historic agreements that required tough decisions made by the first President Bush and President Clinton; by Democratic Congresses and a Republican Congress….. As a result of these bipartisan efforts, America’s finances were in great shape by the year 2000.”

1:57 p.m. ET - @RepWeiner: Somewhere Joe Wilson is yelling "You Lie!" over and over at his TV. President is doing great setting the debate.

1:55 p.m. ET - White House pool reported that Republican Rep. Paul Ryan of Wisconsin and Rep. Jeb Hensarling or Texas are seated in the front row next to Democratic Rep. Jan Schakowsky of Illinois.

1:54 p.m. ET - Obama said we recognize that hard times, illness or lost job may strike – “There but for the grace of God go I,” he said, before adding that Medicare and Social Security make the country better.

1:49 p.m. ET - Obama started his serious speech with a joke: “It’s great to be back at G.W. I want you to know that one of the reasons I kept the government open was so I could be here today with all of you. I wanted to make sure you had one more excuse to skip class. You’re welcome.”

1:49 p.m. ET - @LisaDCNN: WHILE WE WAIT: I'm going thru embargoed text of the speech. I see first mention of Obama's proposal more than 1/2way through. #p2 #tcot

1:36 p.m. ET - @RepWeiner: Health care for the poor gets paid for one of 2 ways : efficiently or inefficiently. Slashing Medicaid only moves the cost.

1:15 p.m. ET - @DanLothianCNN: Obama to set a goal of reducing the deficit by $4 trillion in 12 years or less, according to a snr admn.official.

1:14 p.m. ET- Among those expected to attend the speech Wednesday according to a pool report: Vice President Joe Biden, Treasury Secretary Timothy Geithner, Director of the Office of Management and Budget Jacob Lew, White House Chief of Staff Bill Daley and Chair of the National Economic Council Gene Sperling.

1:04 p.m. ET - Obama will set a goal of reducing the deficit by $4 trillion in 12 years or less in his speech Wednesday, according to a senior administration official, CNN White House Correspondent Dan Lothian reported.

12:32 p.m. ET - @LisaDCNN: I would like to thank the GOP for responding to the president's speech over an hour before he gives it.

11:57 a.m. ET - @RepWeiner: Looking at embargoed fact sheet on Potus plan. Not allowed to tell you about it yet. #ButMyHashtagLikesWhatHeSees

9:42 a.m. ET - On the Senate floor Wednesday, Senate Minority Leader Mitch McConnell, R-Kentucky, said: "The truth is the president is only entering this debate at all because he can no longer ignore the growing bipartisan calls for action. If he were serious he'd be talking about a detailed road map for action not just grabbing headlines by announcing another speech,. Of course we can hope that the president presents more than just his vision for the future this afternoon."