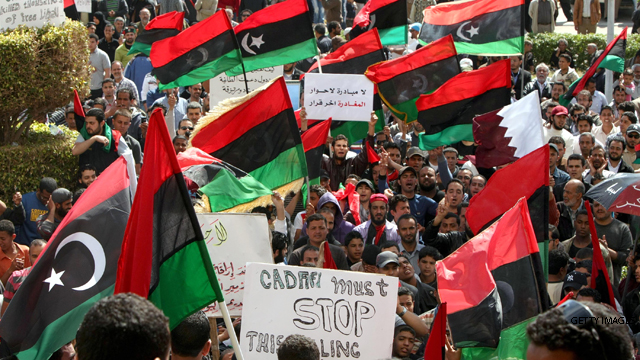 Libyan protestors wave Libya's former flags as they demonstrate outside a hotel during a meeting between African head of states and Libyan rebel leaders, in the eastern rebel stronghold of Benghazi on April 11, 2011.
April 14th, 2011
06:30 AM ET

Washington (CNN) - A small majority polled in a new national survey favor the country's military involvement in Libya and only 14 percent would like to see the U.S. take a lead role in the military efforts in the African country.

The CNN/Opinion Research Corporation Poll showed Americans have backed away from the idea that the United States can be the "world's policeman," amid a growing belief that it is no longer important for the U.S. to be the number-one military power in the world.

On Libya, it seems President Obama is giving the American public what they want, limited engagement in a NATO-led exercise that does not involve ground troops or regime change in its core mission. Fifty-three percent of those surveyed approved of how Obama has handled the situation in Libya, although six in 10 didn't think the Obama administration has a clear policy in the country.

There was also waning interest in removing Libyan leader Moammar Gadhafi from power, in a country where 55 percent of Americans don't think their national interests are at stake.

Nearly eight in ten Americans didn't think the U.S. is at war in Libya and a bare majority favored arming Libyan rebels, while only a quarter would like to see U.S. and NATO ground troops in Libya.

More globally, one in four Americans thought the U.S. could play the role of "world policeman," and the public is split over whether it is important for the U.S. military to be number one in the world, two figures that show a significant change from past years.

After the Persian Gulf War in 1991, nearly half of those surveyed said the U.S. could be the world policeman, compared with the 38 percent that felt the same way in 2003. In 1993, 61 percent said it was important for the U.S. to be number one in the world militarily, and in 1999 almost the same number felt that way. However, that figure has now dropped to just under half. But when asked if the U.S. military is the best in the world, the views of Americans remained unchanged. They were split 50 percent to 50 percent in the 1990s and remain split today.

The CNN/Opinion Research Corporation Poll was conducted by telephone, with 824 Americans questioned between April 9 and April 10. The survey had a sampling error of plus or minus 3.5 percentage points.