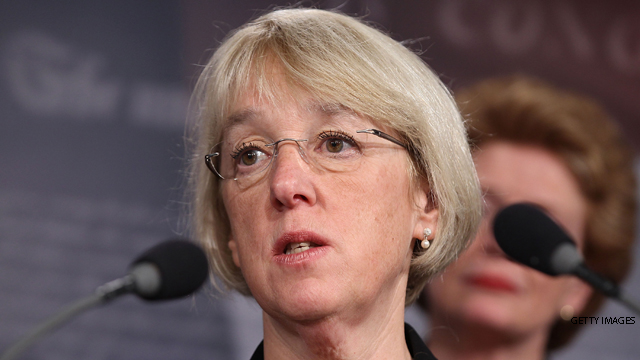 Murray, happy she's not a Republican

Washington (CNN) - To keep control of the Senate, Patty Murray, Chairman of the Democratic Senatorial Campaign Committee, is targeting six currently Republican held Senate seats while defending the 23 seats held by Democrats up for reelection in 2012.

Although she's not expecting the cycle to be easy, the senior Washington senator said unrest in the Republican Party only helps her chances.

"I don't have the NRSC's (National Republican Senatorial Committee) problem. I don't have bloody primaries," Murray said Thursday at a briefing with reporters. "(They) got a tough game and I'm just happy to watch."

The new "6 in '12 campaign" that she announced will target Republican-held seats in Massachusetts, Nevada, Indiana, Maine, Arizona and Texas, states Murray said she expects to become "blue states."

She said the DSCC has already endorsed Shelley Berkley in Nevada and expects other clean primaries, adding that she does not anticipate any other Democratic retirements before the next cycle. But self-funding Democratic lawyer Byron Georgiou, who announced his run for Senate in Nevada March 7th, raised $1.1 million in the first quarter of fundraising, which includes $500,000 of his own fortune.

The three-term senator said Democrats have the Republican agenda on their side politically, pointing to the Republican budget proposed by Rep. Paul Ryan, R-Wisconsin, and recent efforts by GOP members of the House to defund Planned Parenthood.

"People now understand what having a Republican House means for policy," Murray said.

As the woman in charge of fundraising for the Senate committee, Murray said she is confident in President Obama's ability to energize voters in 2012.

"We in D.C. underestimate the reservoir of support people have for this guy (Obama)," Murray said.

The NRSC responded to her event before it started, saying Democrats "appear oblivious to the reality that a number of their incumbents are running in red states next year."

"Republicans can only hope they continue to demand that every one of their candidates toe the party line," NRSC Communications Director Brian Walsh said in a statement. "Instead of listening to voters and learning from their losses at the ballot box last November, Democrats are doubling-down on their big government agenda and their extreme, left-wing rhetoric leaves their party even more vulnerable to losing control of the Senate next year."