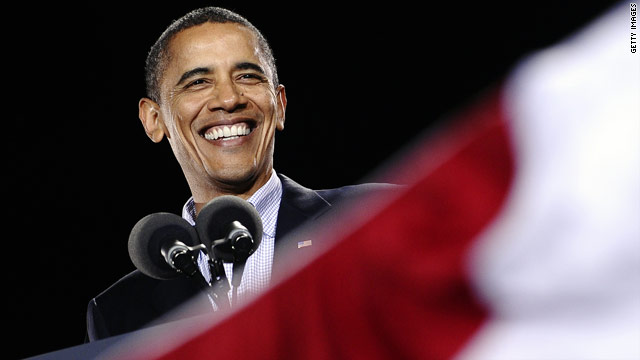 Washington (CNN) - President Barack Obama heads to his hometown Thursday evening to begin fund raising for his re-election bid for the White House.

The president is the main attraction at three events in Chicago. The first two are smaller gatherings at Nine and MK, restaurants in the city. The third and largest event is being held at Navy Pier, along the shore of Lake Michigan.

The president announced his re-election bid on Monday April 4, with an e-mail and video sent to supporters. His campaign says it received 23,000 contributions in the first 24 hours following Obama's re-election announcement, with nearly all of those donations in the amount of $200 or less, a source confirms to CNN.

The president's 2008 campaign for the White House raised nearly $750 million, shattering all records, and much of that money came from small dollar donors. The goal this time around is for the campaign to bring in up to $1 billion.

A Democratic source tells CNN that all money raised from the three events Thursday will go to Obama Victory Fund, which is shared by the president's re-election campaign and the Democratic National Committee.

The source adds that the events are designed to include a broad range of Obama's supporters, with tickets starting at $100 and ranging to the legal maximum limit of $35,800. The smaller dinners will have approximately 225 guests and the larger event is expected to have approximately 2,000 people. The larger gathering event at Navy Pier is being hosted by Gen44 – a group of young supporters working to re-elect the president.

Expected in attendance are Chicago Bulls all-star point guard Derrick Rose and all-pro Pittsburgh Steeler Rashard Mendenhall, who played college ball at the University of Illinois. Also showing will be Ernie Banks, one of the most famous baseball players in Chicago Cubs history, as well as the city's Mayor-elect, Rahm Emanuel, who stepped down last autumn as the president's White House chief of staff to run for mayor.

Obama's fundraising tour heads west next week, with events in San Francisco and one in Los Angeles that is being put together by movie mogul Jeffrey Katzenberg.

The following week the president is expected to attend a fundraiser in New York City.