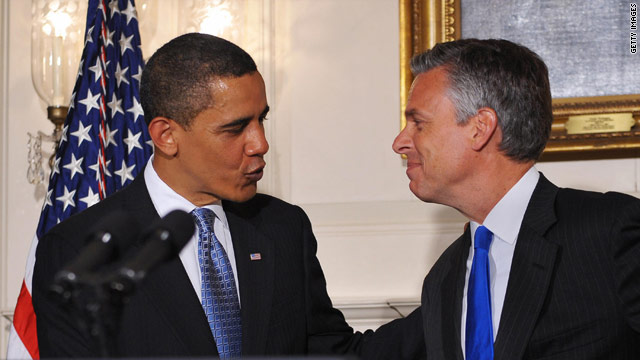 Washington (CNN) – A source associated with Jon Huntsman's potential campaign for the Republican presidential nomination is brushing off a newly revealed letter from the outgoing U.S. ambassador to China that praises President Barack Obama as a "remarkable leader."

The letter, acquired by the conservative media website The Daily Caller from an unnamed source, was handwritten by Huntsman on August 16, 2009.

"You are a remarkable leader," Huntsman writes in the note, adding an underline to the word "remarkable." "[And] it has been a great honor getting to know you."

The effuse praise of the president is likely to haunt Huntsman should he decide to mount a Republican presidential bid later this year. Huntsman, the former governor of Utah who is scheduled to leave his ambassador post at the end of this month, has already faced skepticism from some Republicans that it will be difficult to mount an effective campaign against the man he served dutifully for two years.

But the source close to Huntsman's possible campaign suggested to CNN the leak of the praiseworthy letter is a sign the White House is threatened by Huntsman more than any other Republican.

"Need further proof the White House fears Jon Huntsman the most? I don't think so," the source said.

Huntsman's praise for politicians who are usually Republican punching bags didn't stop with Obama. In other letters acquired by the Daily Caller, the outgoing Ambassador told former President Bill Clinton, "I have enormous regard for your experience, sense of history and brilliant analysis of world events."

And in the same letter to the former president, he applauds Secretary of State Hillary Clinton for "winning the hearts and minds of the State Dept. bureaucracy – no easy task."

After watching her in action, I can see why," wrote Huntsman. "She is well-read, hard working, personable and has even more charisma than her husband! It's an honor to work with her."

Huntsman has said he will decide on a presidential bid later this spring.