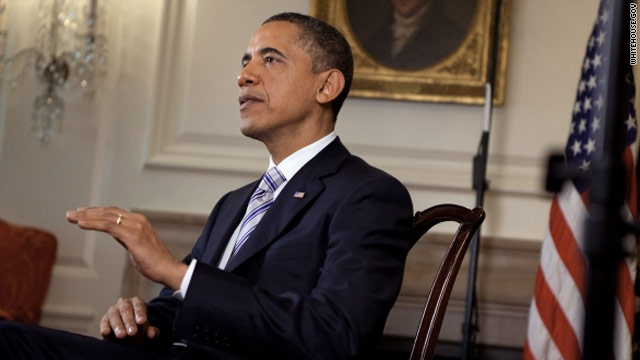 Obama, Coburn engage in battle of the budgets in weekly addresses

Washington (CNN) – President Obama advocated for his proposed budget in the weekly address Saturday, calling it a “balanced plan that reduces spending and brings down the deficit” to put America “back on track.”

He warned that, without action, the “rising tide of borrowing” will damage the economy, but also cautioned that action must be in the form of a “balanced approach to reduce the deficit.”

With the goal of protecting the middle class, commitments to seniors, and “job creating” investments in education and clean energy, the president proposed a strategy based on “shared responsibility and shared prosperity” and criticized the budget plan presented by House Republicans saying the intention was worthy, but the “vision is wrong for America.”

He listed faults with the GOP plan saying, “It’s a vision that says when other nations are hustling to out-compete us for the jobs and businesses of tomorrow, we make drastic cuts in education, infrastructure, and clean energy-the very investments we need to win that competition and get those jobs.”

Highlighting a need to “share sacrifice” in deficit-tackling measures, Obama denounced the GOP plan to “give $1 trillion in tax breaks to the wealthiest two percent of Americans” and “cuts to Medicaid” that would leave millions of seniors, children, and Americans with disabilities without care.

Instead, the president said his “balanced approach” would match the $4 trillion in deficit reduction proposed by House Republicans by finding savings in the defense budget, reducing health care and tax code spending and strengthening Medicare and Medicaid.

The president’s plan would reach $4 trillion in deficit reduction in 12 years, as opposed to the Republican’s timeline of the same amount in 10 years.

He also acknowledged the differences between both parties but said, “You expect us to bridge those differences.”

“I believe we can. I believe we can live within our means and live up to the values we share as Americans.” And pledging his own effort, the president said, “I’ll work with anyone who’s willing to get it done.”

Two-term Oklahoma Sen. Tom Coburn opened the GOP rebuttal by declaring that Republicans have “changed the culture of Congress.” Citing a shift away from earmarks he said, “These changes could not have come soon enough.

He also took aim at the president stating, “Unfortunately, in his speech this week on the deficit, President Obama took us three steps backwards.”

Coburn hit back at what he called the president’s attack on “those who have a different vision of the government.

“The truth is, we could face a serious debt crisis sooner than anyone expects,” he said.

Calling entitlement programs such as Medicare, Medicaid, and Social Security “unsustainable,” Coburn, a physician, said, “The president is jeopardizing benefits for the very Americans he says he wants to protect” by exempting entitlements from reform.

And he delivered a stinging criticism of Obama’s plan stating, “The president says he wants to use a scalpel, but as a physician, let me tell you, when it comes to waste and duplication at the federal government level…We need a chain saw.”

Still, Coburn said, “I know there isn’t a problem we can’t solve if we do it together.”