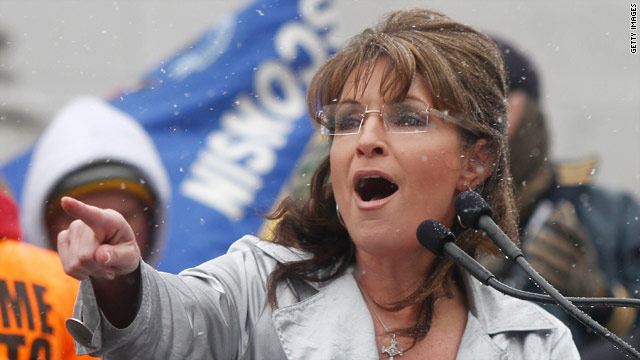 Palin to GOP: ‘Learn how to fight like a girl’

Click to watch video
“What we need is for you to stand up, GOP, and fight. GOP leaders need to learn how to fight like a girl.”

The 2008 GOP vice presidential nominee heralded Madison as an example for Republicans to follow by recalling the Wisconsin legislature’s approval of a controversial bill that restricts the collective bargaining rights of unions.

“I’m in Madison because this is where real courage and real solidarity can be found,” she said.

“You saw these violent rent-a-mobs trash your capital and vandalize businesses. You held your ground. Your governor did the same thing. And you won.”

Palin defended Gov. Scott Walker’s union-limiting legislation because “he understands that states must be solvent to keep their promises” and “a pension is a promise that must be kept.”

And the possible 2012 GOP nominee hopeful painted events in Madison as a lesson Republicans can learn from. Criticizing GOP leaders for promising to cut $100 billion in federal spending but compromising at $38 billion in the recent bipartisan budget agreement, Palin said, “That’s not courage, that is capitulation.”

She also had strong words for the president, blasting him for getting the country into a “third war” it can’t afford, cutting off oil development and “misrepresenting” deficit spending.

And to the crowd gathered in Madison, Palin promised a place in history.

“When the history of the Tea Party is written, what you accomplished here will not be forgotten. And the 2012 election begins here,” she affirmed.

To drive the point home, Palin recalled the Green Bay Packers’ 2011 Super Bowl win, saying, “What better place to call out the liberal left and let them know, Mr. President, game on!”