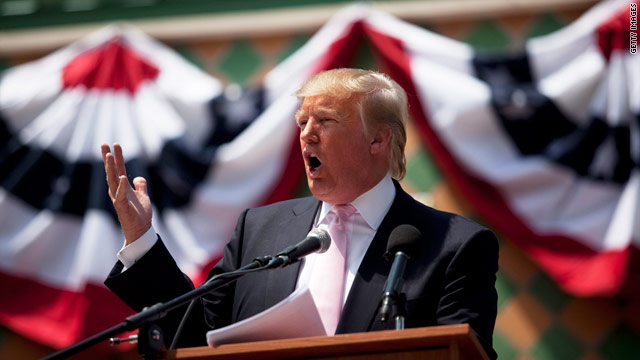 Boca Raton, Florida (CNN) – Donald Trump unleashed a fiery anti-President Barack Obama stump speech for members and supporters of the South Florida Tea Party Saturday and made frequent references to what he would do as president.

Throngs of fired-up voters in a vote-rich battleground state encouraged him.

While the billionaire real estate developer is not currently a presidential candidate, his appearance at a Tea Party event in Florida might have made the casual observer think he is running.

And yet, unusual moments made Trump’s speech unlike any other so far this political season. He harshly criticized some Republicans, tailored his speech based on crowd shout-outs, dissed hecklers, used a curse word and recalled how his wife urged him not to be “conceited."

The event was one of many similar events as conservative grassroots activists mount “Tax Day” protests this weekend.

While much of what Trump said was noteworthy, it may also be of interest to some what he did not mention.

Trump did not reiterate his support for 2008's bank bailout, an act that the Tea Party movement despises. Nor did he discuss his past as a Democrat-turned-Independent-turned-Republican, his reported past leanings in favor of abortion rights and universal health care or his support for and financial contributions to Democrats and Republicans since 1990.

Trump, who has said he will announce his presidential intentions by early June, did appear to enjoy the moment with the assembled Tea Party activists.

“The opportunity to address this group of really hard-working, incredible people is my great honor. Believe me,” Trump began.

From there, he launched into an address that was part campaign attack speech, part self-promotional manifesto and part laugh-inducing sideshow.

He reiterated his view that the United States has become “the laughingstock and whipping post for the rest of the world.”

“I’ve said on numerous occasions, that countries like China, India, South Korea, Mexico, the OPEC nations and many others view our leaders as weak and ineffective. And we have repeatedly, unfortunately been taken advantage of to the tune of hundreds of billions of dollars a year,” Trump said. “We have to take our country back.”

The host of NBC’s “The Apprentice” continued by blasting what he and critics call “Obamacare,” repeated his recent demands that Obama “release his birth certificate” and called for increased spending on education.

“How about Libya, isn’t that a beauty?" he continued. "We don’t want to change the regime. We want nothing to do with the regime, but we want them out. I can just imagine our soldiers and pilots – they’re probably saying, ‘What does he (Obama) mean? He said he’s not going to be involved in the regime change. And then in another speech he says, we want him out. What does it mean?’ In the meantime, it’s a total disaster. Because nobody knows what the hell they’re doing. And Gadhafi is winning.”

On China: “You can't have China, taking our jobs, taking our money, making our products. And the amazing thing, then they do all of this and then they loan us money and we pay them interest. And what do they do? They manipulate our currency. Now I know how to stop it.”

Trump’s emphasis on his own skills as a businessman and negotiator was consistent throughout his speech.

“Businessweek magazine said in a vote of its readers, that Donald Trump was the world’s most competitive businessperson," he boasted. "With Bill Gates being number two and Warren Buffet being number three. Steve Forbes stated that I was one of the greatest entrepreneurs in the history of free trade."

After a heckler began to taunt Trump, he mocked and dismissed the person. At various points throughout the speech, members in the crowd shouted out topics they hoped to hear Trump discuss and he obliged them.

As he touted his business bona fides, Trump mentioned how his wife urged him against being “conceited.” And while claiming there were huge writing differences between Obama’s first book, "Dreams From My Father", and the second, "The Audacity of Hope," Trump used profanity to say they could not have both been written by Obama.

“The man that wrote the second book ... didn’t write the first book," Trump said. “The difference was like chicken salad and chicken (expletive)."

Meanwhile, Trump also continued to lash out at Republicans. On Friday, he criticized  former President George W. Bush as he called Obama "the worst president in the history of the United States," something he called President Bush in 2007.

At the Saturday event, Trump repeated his bipartisan bashing of Bush and Obama. He also lashed out at former Bush adviser Karl Rove, who recently criticized Trump for raising questions about Obama's birthplace.

"He was an interesting candidate who had a business background and could have contributed to the dialogue. But his full embrace of the birther issue means that he's off there in the nutty right and is now an inconsequential candidate," Rove said on Fox News. Rove called Trump "a joke candidate," who would never be voted into the White House.

In his Saturday speech, Trump responded.

"What he (Rove) said was amazing. He was so against me because I am questioning. All I want to do is see this guy's birth certificate," he said.

"And you know, the Republicans have to be very careful of that. Because obviously Karl Rove didn't do very well the last couple of years in the Bush administration. Because, hey, whether you like him or not, George Bush gave us Obama. And I'm not happy about it."