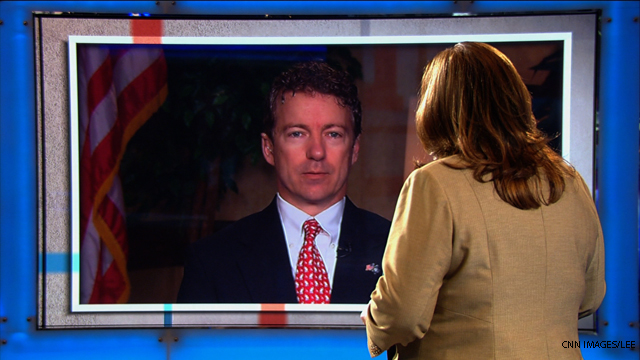 Sen. Paul: Both sides need to give in

“The compromise is for conservatives to admit that the military budget’s going to have to be cut,” Paul said Sunday on CNN’s “State of the Union.” “Liberals will have to compromise and will have to cut domestic welfare.”

Click to watch video
“The compromise is where we cut, not where we raise taxes,” he added.

“The most important thing is what the president said this week, which is those tax cuts won’t be continued,” the New Yorker said on CNN’s “State of the Union.”

When asked about the debt limit, the next major battle in Congress, Paul reiterated his stance that he would only vote for an increase in the $14.3 trillion limit if the legislation is passed with a balanced budget amendment and “say from here on out this is the last time we’re doing it.”

Treasury Secretary Timothy Geithner has warned the ceiling, or legal limit the United States is allowed to borrow, will be reached by May 16.

But the Tea Party favorite said he was undecided over whether to use the congressional tactic known as a filibuster to delay the vote.

“I think that’s yet to be determined,” Paul told CNN Chief Political Correspondent Candy Crowley. “I think we haven’t yet determined what our strategy will be, but I can tell you that the people of Kentucky elected me to shake things up; they didn’t elect me to raise the debt ceiling.”

Weiner said there are conditions that must be met to reach a deal over the debt limit.

“I think the debt ceiling should be passed as clean as possible. I know debt limits frequently have things attached, I understand that,” Weiner said. “But I have to tell you, if they (Republicans) wind up holding up Medicare, Social Security … it’s a non-starter. Democrats won’t vote for it.”