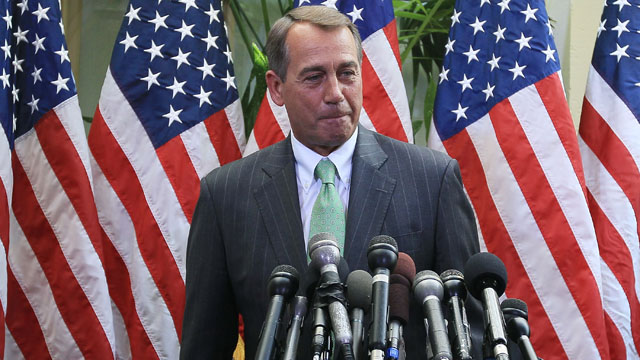 Boehner wraps up Congressional visit to Iraq to assess progress, next steps

Washington (CNN) - House Speaker John Boehner, R-Ohio, led a six-member congressional delegation to Iraq this weekend. The trip came at a crucial time for Iraq, as the last U.S. forces are scheduled to depart the country by year's end.

Boehner issued the following statement on the delegation visit:

"Just four years ago, a terrorist insurgency was killing innocent civilians and wreaking havoc across the country. Today Iraq is a different country. By taking the fight to al-Qaeda, the insurgency, and other terrorist threats, our men and women in uniform succeeded in providing greater security to the Iraqi population and giving the government the time to build capacity to more effectively meet the needs of the Iraqi people. Our members were able to see this progress firsthand.

"As a result of the significant progress that has been made, the drawdown of U.S. troops that began under the previous administration has been able to continue. Our first priority must be ensuring that the remaining 46,000 U.S. forces and their civilian counterparts that are working with the Government of Iraq and advising and assisting the Iraqi Security Forces have the resources and support they need to complete their mission.

"It is also critically important that we continue to assist and engage with the Iraqi Government to ensure that the hard-fought gains in a post-combat Iraq translate into long-term success. Iraq is critical to our immediate and long-term national security interests, and we must protect the economic, political, and security progress that has been made. The delegation focused on the issues expected to determine how the Government of Iraq and the United States proceed during the transition this year and how we will continue to work to maintain a mutually beneficial relationship moving forward which fully respects Iraq's sovereignty and reflects core U.S. interests and values.

"This discussion about progress in Iraq wouldn't have been possible were it not for the courage and sacrifices made by our troops and diplomats, as well as their families. We give thanks for all that they have done, and continue to do, to advance freedom abroad and strengthen our security at home."