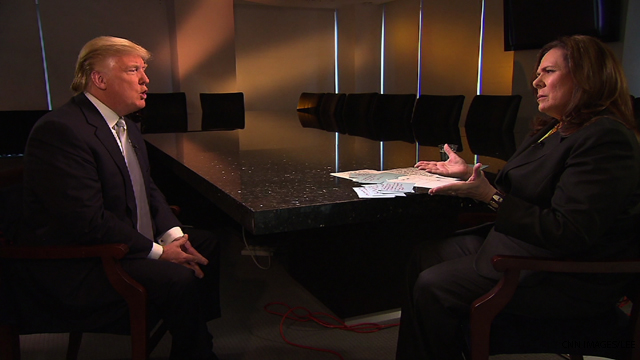 Trump: I’m ‘much bigger’ than Romney

“I'm a much bigger business man and have (a) much, much bigger net worth. I mean, my net worth is many, many, many times Mitt Romney,” Trump said Sunday on CNN’s “State of the Union.” “I built a very big net worth and I’d like to put that ability … to work for this country.”

Click to watch video
“I don’t do it for myself, I’ll be doing it for the country,” Trump added. “And guess what? That’s what this country needs.”

The “Celebrity Apprentice” star has flirted with a bid for the White House in recent months and is expected to make an announcement after the show wraps May 22.

But Trump said he wishes he didn’t have to run for president.

“I love my life. I love what I’m doing,” Trump told CNN Chief Political Correspondent Candy Crowley. “I wish I didn’t have to do it. I would prefer not doing it. But I love this country.”

Although he said he’s honored by his rising poll numbers, he conceded his name identification helps him.

When asked if he will “stir the pot” in the 2012 race, he rattled off a list of what he thinks is wrong with America, including China and Saudi Arabia “ripping us off.”

The March CNN/Opinion Research Corporation survey questioned 1,012 people by telephone. The survey's overall sampling error was plus or minus three percentage points.

The April CNN/Opinion Research Corporation poll was conducted by telephone, with 824 people questioned. The survey's overall sampling error was plus or minus 3.5 percentage points.