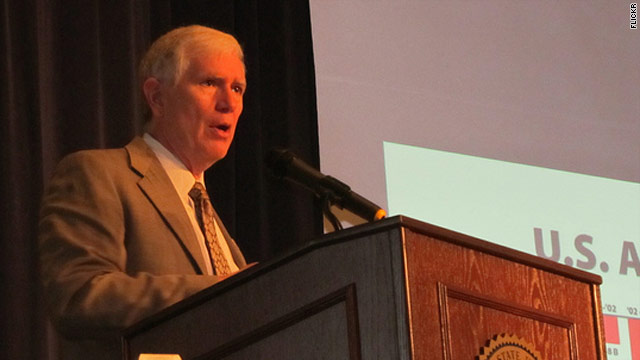 (CNN) – Rep. Mo Brooks, the Alabama Republican who withdrew his statement on the House floor Friday that referred to his fellow congressmen as "socialists," says he's not sorry for the remark and thinks his colleagues are "thin skinned."

"I was making a point only about an economic system," Brooks, a first-term congressman, told his hometown paper, the Birmingham News.

The comments came during Brook's House floor speech while he was voicing opposition to a 2012 budget plan being proposed by several Democrats who make up the progressive caucus.

"Folks, we are here today forcing this issue because America is at risk. We are at risk of insolvency and bankruptcy because the socialist members of this body choose to spend money that we do not have," he said during the speech.

Rep. Keith Ellison, a Democrat, promptly interrupted Brooks, asking that his remarks be "taken down," a rare request that opens up the possibility for disciplinary action if the comments are later ruled inappropriate. Brooks instead asked that his remark be stricken from the record.

But in his interview with the Birmingham News, Brooks, who holds an economics degree from Duke, said he was merely defending the Republican economic view of free enterprise.

"People could quite clearly infer that socialism is what the other guys are promoting," he said.

"I was making a point only about an economic system," Brooks said.