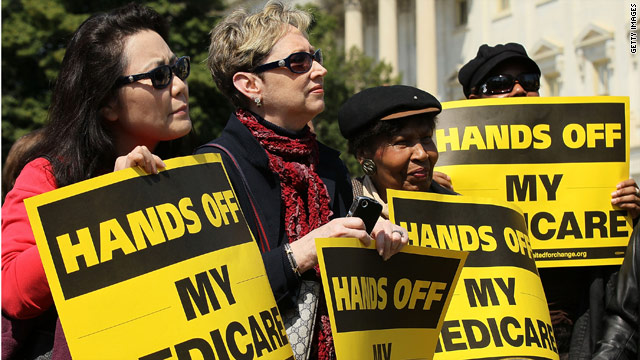 Campaign battle over Medicare heats up

Washington (CNN) - It shouldn't be any surprise that national Democrats are targeting 25 House Republicans who they say "voted to end Medicare."

It's all about an extremely important voting group: Senior citizens.

The Democratic Congressional Campaign Committee announced Tuesday that it's launching a paid advertising campaign against 25 Republican lawmakers who they consider vulnerable in next year's elections. The DCCC says their new push consists of radio ads, live and automated phone calls, web ads and over 4.5 million "action alert" e-mails.

One of the news-weather-traffic radio ads asks "Did you know Congressman Chip Cravaack voted to end Medicare, forcing seniors to pay $12,500 for private health insurance, without guaranteed coverage? Tell Cravaack to keep his hands off our Medicare."

The new push is part of the committee's "Drive for 25" campaign, which focuses on capturing 25 GOP House seats in 2012, which would give the Democrats control of the chamber that they lost in last year's midterm elections.

All 25 lawmakers last week voted in favor of the House Republican's 2012 budget proposal, which was put together by Ryan, the chairman of the budget committee.

The DCCC is also trying to fundraise off the campaign, saying that if $25,000 is raised over the next 48 hours, the web video would be the DCCC's first paid ad this cycle.

Hours after the announcement of the DCCC's campaign, the National Republican Congressional Committee fired back.

"The Democrats' shameless scare tactics are merely a way to mislead voters and cover up the real Democrat plan to watch Medicare die a painful death, an unacceptable option for America's seniors," NRCC Deputy Communications Director Joanna Burgos tells CNN. "The reality is that the Republican budget blueprint saves Medicare for future generations with no disruption for those in and near retirement, while the Democrats' plan cuts Medicare benefits and raises taxes on job creators and every person who receives a paycheck."

Voters 65 and older cast more ballots for Sen. John McCain over Sen. Barack Obama by a 53 to 45 percent margin in the 2008 presidential election, according to national exit polls. They were the only age group that McCain won.

In last year's midterm elections, seniors voted for the Republicans over the Democrats by a 59 to 38 percent margin. National Republicans effectively used Medicare as an issue with seniors during the campaign, warning that the new health care law passed earlier in 2010 by congressional Democrats and signed by President Obama could weaken Medicare.