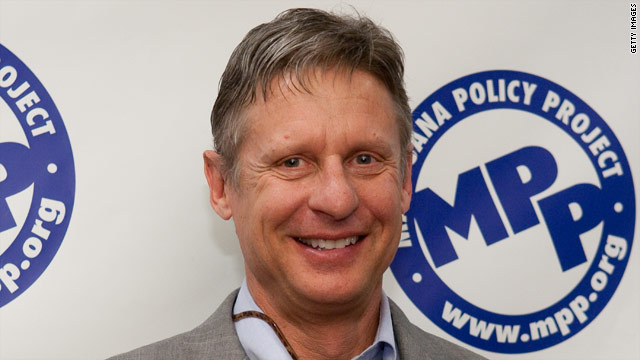 Washington (CNN) - Joining the colorful group of Republicans throwing their hats in the ring for the 2012 presidential nomination, is former New Mexico Governor Gary Johnson, who announced his candidacy Thursday on the steps of New Hampshire's State House.

The libertarian-leaning Republican, who has been compared to the likes of Ron Paul, is an avid supporter of the legalization of marijuana, gay marriage, and abortion rights in most cases. Johnson is also a vocal advocate of cutting a huge chunk - 90 percent - of the defense budget.

"Today's mess didn't just happen. We elected it-one senator, member of Congress and president at a time," Johnson said in a statement. "Our leaders in Washington, D.C., have 'led' America to record unemployment, a devalued currency, banking scandals, the mortgage crisis, drug crisis, economic crisis, loss of our nation's industrial might - and a long list of other reminders our nation is way off course."

Johnson, who was New Mexico's governor for 1995 to 2003, has spent the past year traveling the country speaking about economic issues and raising money through his nonprofit political group, Our America Initiative. The group can raise unlimited donations from corporations and individuals but does not have tax status to fund a presidential campaign.

"I look at the rest of the field running for president, and that song by The Who comes to mind. Meet the new boss. Same as the old boss. You know the one. We 'Won't Get Fooled Again.' What's the definition of insanity? It is to keep doing the same thing over and over, and expecting a different outcome," Johnson said. "I'm ready for a different America. I'm ready for the day when a person can build a good life on a decent income, and we can take our government at its word – when people have more to smile about. I'm ready for peace and prosperity and some American dreaming. I'm ready for America to be AMERICA again."

Johnson will spend the rest of the week in the key early campaign state of New Hampshire, meeting with potential supporters and visiting local businesses.