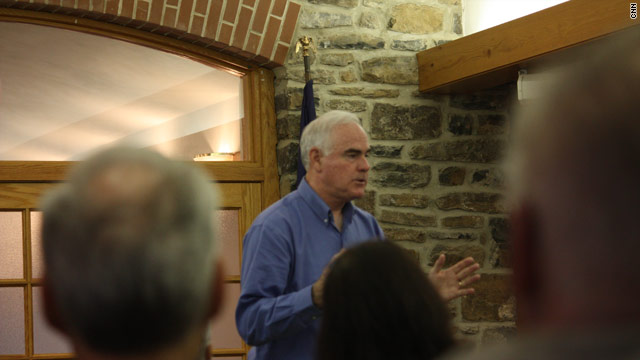 Philadelphia (CNN) - In the suburbs of Philadelphia, freshman Congressman Patrick Meehan is spending his day running around his district, answering questions from his constituents. During the two week Congressional break, the Pennsylvania Republican is fitting in five different town hall meetings in just one day.

"We're heading down now into Radnor Township, which is the heart of Philadelphia's old main line. I represent a district that is very diverse," Meehan says as he drives down the highway from his first town hall at Upper Providence township to his second meeting of the morning.

Meehan says he wants to spend days like this listening to his constituents.

"It gives you a chance to come out and hear from people, sort of unplugged," Meehan says. "You can't control what they're going to say but are going to hear what's on their minds and sometimes in their hearts. And you don't really get that from polls or any other kind of thing."

It also gives him a chance clear up what he says are misconceptions about his votes and the Republicans plan for entitlement reform, specifically Medicare.

"Well the issues of entitlement reforms are reflected in their questions in which they're worried about the ability for it to be there," says Meehan, "and we've been discussing the fact that they don't have to worry about that, they're senior citizens."

Meehan was asked about entitlement reform and Medicare at nearly every town hall he went to. Some of his constituents say they're worried about proposed Republican reforms to the Medicare system.

Some just want all entitlement programs overhauled, all together.

"I think the entitlements need to be looked at a lot I think there are a lot of inefficiency," says Kathy Bogosian, who voted for Meehan in 2010.

And some are just confused.

"Right at this point, I don't even know what my concern is," says senior Phyllis Sordi. "I'm just totally confused. The whole thing just has me so confused."

Medicare reform is a big deal in Meehan's district, and he says seniors are an important voting block and adds that he knows some of the pitfalls.

"We have a district that trends towards an elderly population. This is a mature suburb, many people have raised their children and stayed in their homes, even if the children have moved on. So we've got a disproportionate number of seniors," says Meehan. "This is an educated constituency, and it's an intelligent constituency. It's a swing constituency, which means that they do look back and forth and see what's going on. There's got to be some political risk."

Not only is Congressman Meehan trying to sort out the confusion and allay his constituents' fears, he's also trying to fight back against Democrats who see him as an easy target.

Meehan represents Pennsylvania's 7th District, which was vacated by liberal Democrat Joe Sestak, who gave up the seat for an unsuccessful Senate run last year. Meehan captured the seat during the Republican sweep in 2010, but the district has a strong Democratic Party presence, having voted for President Barack Obama in 2008 and John Kerry in 2004.

After he voted for the Republican backed budget proposal last week which reforms Medicare as a component of the plan, the Democratic Congressional Campaign Committee put out a press release targeting Meehan saying, "Representative Pat Meehan voted to end Medicare and raise health care costs for Pennsylvania seniors," and, "While Representative Pat Meehan wouldn't touch taxpayer subsidies for Big Oil companies and tax breaks for the ultra rich, he sold out Pennsylvania seniors by ending Medicare and leaving them with the bill."

Meehan says it is hard to get his message through, what he calls, the political clutter. "Foremost what's unfortunate about the circumstances right now, the scare tactics that have been part of the process. The Ryan plan [the Republican backed budget plan] is being demonized by some and yet the essence of it is it changes nothing with respect to seniors on Medicare," says the Congressman.

"To the extent that people are going to demagogue this from a political perspective it can be twisted and turned in a way in which they try to misrepresent things and put you in a defensive position politically," Meehan says.

But Democrats point to Meehan's campaign pledge to never support a voucher system for Medicare, and claim his vote for the Ryan budget plan shows he's already done just that.

Meehan, though, says he's doing the right thing for his constituents, and promises he's going to continue doing what he thinks is right in this debate and future debates, despite political threats from Democrats.

"I don't want to surrender any of this. I've worked very, very hard to get here," says the congressman. "I don't believe by doing this it means we won't be able to stay here, but I'm also not only gonna stay here if it means that I'm going to be dishonest or have to not deal with that which is put before us."