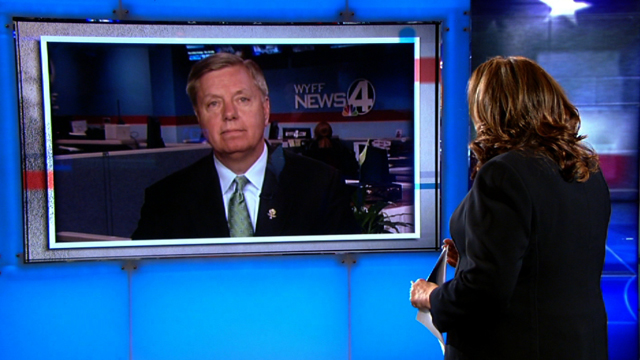 Graham: 'Cut the head of the snake off' in Libya

Washington (CNN) - Republican Sen. Lindsey Graham of South Carolina has a recommendation to NATO and the Obama administration when it comes to their involvement in Libya: bomb Libyan leader Moammar Gadhafi's inner circle and remove him from power.

"Go to Tripoli, start bombing Gadhafi's inner circle, their compounds, their military headquarters in Tripoli," Graham said Sunday on CNN's "State of the Union." "I think the focus should now be to cut the head of the snake off. That's the quickest way to end this."

Click to watch video
Graham, a member of the Senate Armed Services Committee, was an early proponent of a no-fly zone in Libya and has consistently said troops should attack Gadhafi while arming anti-Gadhafi rebels.

The calls come while rebel forces attempt to oust the long-time leader, who has been in power for 42 years.

Although the United Nations resolution that authorized force in the African country did not sanction removing Gadhafi from power, and instead called for coalition forces to protect the Libyan people, Graham said the only way to make the operation successful is to "put pressure on Tripoli."

"I would do what would be best for the United States, the Libyan people, the region in the world, and that's replace Gadhafi," Graham added.

When asked if there would be backlash from other countries if the United States removes Gadhafi, Graham said: "I don't think there are many people in the world that will be very upset if Gadhafi is taken out of Libya, particularly in the Mid-East. Look at the Mid-East countries participating. NATO is uneven in terms of this engagement strategy. The American airplanes have been taken out of the fight. It's making it more difficult for NATO to support the rebels."

Moving forward Graham said the United States should better arm the Libyan rebels, but that the campaign is missing an effective NATO air campaign.

"The day that NATO lost American air power, it became less effective," Graham said. "Make sure that Gadhafi forces lose on the battlefield. Better equip the Libyan rebels. Have more air power coming to their aid so they begin to win on the battlefield."