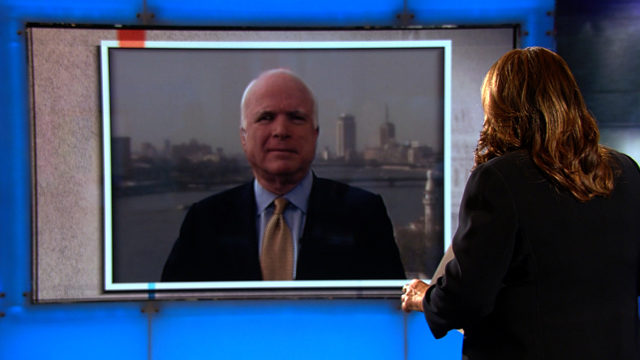 Washington (CNN) - Republican Sen. John McCain warned of a stalemate in Libya that could lead to al Qaeda filling a leadership void in the African country.

Click to watch video
In order to avoid such a situation, the senior Arizona senator, who serves as the ranking Republican on the Senate Armed Services Committee, said rebel forces need training and equipment in order to successfully fend off Libyan leader Moammar Gadhafi’s forces.

McCain said the anti-Gadhafi rebels are “badly outgunned in armor, in equipment, in training.”

Speaking from Cairo, Egypt following a trip to Libya, McCain seemed to disagree with his colleague, Republican Sen. Lindsey Graham of South Carolina, who earlier on CNN said the U.S. should bomb Gadhafi’s “inner circle” in Tripoli and remove the long-time leader.

“I certainly think that we ought to make Gadhafi aware that his very life is in danger, but I think we just have to be a little careful how we do that. I think we can achieve the goal of him being finished off by pursuing the battlefield on the ground as well,” McCain told CNN Chief Political Correspondent Candy Crowley.

“We can't count on taking Gadhafi out. What we can count on is a trained, equipped, well-supported liberation forces, which can either force Gadhafi out or obtain victory and send him to an international criminal court,” McCain said. “My emphasis is in winning the battle on the ground, not taking a chance on taking him out with a lucky airstrike.”

Both McCain and independent Sen. Joe Lieberman of Connecticut, who is part of the Democratic caucus, said the United States needs to lead the NATO forces, but McCain said “that does not include boots on the ground.”

And Lieberman, who chairs the Senate Committee on Homeland Security and Government Affairs, said the U.N. Security Council resolution that authorized force in Libya could also be used to target Gadhafi.

“If you look at the United Nations resolution that is the basis for our going into Libya, I think it gives justification, if NATO decides it wants to for going directly after Gadhafi because the U.N. resolution authorizes the use of all means necessary to protect the civilian population of Libya,” Lieberman said Sunday on CNN’s “State of the Union.” “I can’t think of anything that would protect the civilian population of Libya more than the removal of Moammar Gadhafi.”