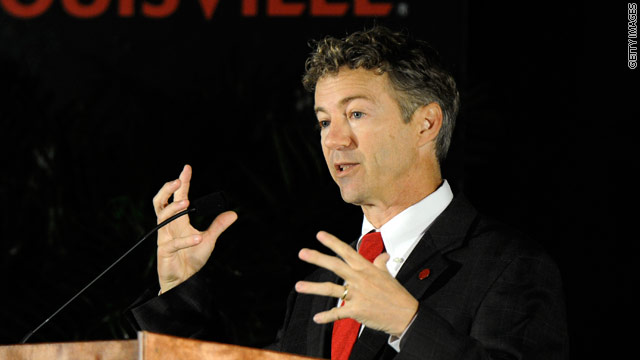 Washington (CNN) - Republican Kentucky Sen. Rand Paul reacted to his father's decision to form a presidential exploratory committee Tuesday, saying his wife is "quite happy" Texas Rep. Ron Paul is running instead of her husband.

"The interesting thing is the Paul household in Kentucky is breathing a sigh of relief, my wife is quite happy that it's Ron Paul running and not Rand Paul," Sen. Paul said Tuesday on CNN's "John King, USA." "She said she's had enough elections for awhile."

Click to watch video
Although Sen. Paul, who was elected in 2010, said there is a chance he would have entered the race for the White House if his father had decided against a bid, the younger Paul seemed focused Tuesday on promoting Republican Rep. Paul, defending his age and touting his name recognition.

The newly elected senator said his father, who has served 12 terms in Congress, has a "much greater chance" now than he did when he last ran in 2008 because he is "well known."

"In 2008 only about one or two percent of the people knew him early on. By the end and by now about 80 percent of America knows his name," Sen. Paul told CNN Chief National Correspondent John King. "He has a much greater chance than he did before but many of those other candidates even those who have been governors of states are not well known across the United States."

When asked about the age of his father, who will be 77 on Election Day, the Tea Party favorite said "his intellectual curiosity makes him a much younger man than his years."

He was also skeptical of a Donald Trump White House run, especially given his campaign contributions to Democratic candidates.

"I think it's hard for an entertainer or comedian to be treated seriously and that's the big hurdle he will have to overcome," Paul said. "We'll let the public decide that, but I'd say he does have quite a few hurdles to overcome to be taken seriously."