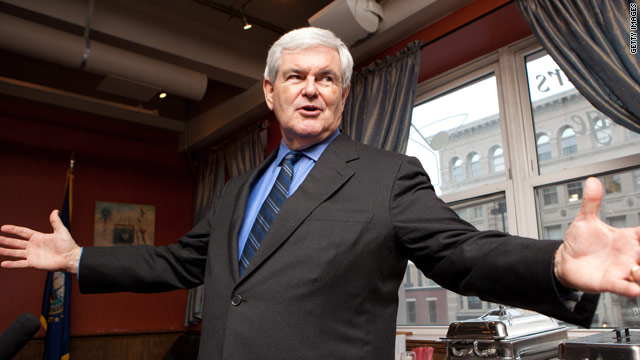 It's a pet topic for Gingrich, who converted to Catholicism two years ago. His 2006 book "Rediscovering God in America" opened with the blistering line: "There is no attack on American life more destructive and more historically dishonest than the secular Left's relentless effort to drive God out of America's public square."

Gingrich, who is expected to formally announce a 2012 presidential bid in the coming weeks, drilled down on that theme at the National Catholic Prayer Breakfast.

Reading from prepared remarks, Gingrich walked the audience through his "faith journey to Catholicism" and recalled a discussion with Reverend Monsignor Walter Rossi of the Basilica of the National Shrine of the Immaculate Conception in Washington.

The two men chatted about "the crisis of secularism in Europe and the growth of a government-favored pagan culture to replace Christianity," he said, and agreed that American churchgoers are now facing a similar predicament.

"The American elites are guided by their desire to emulate the European elites and, as a result, anti-religious values and principles are coming to dominate the academic, news media, and judicial class in America," Gingrich said.

Gingrich blasted the "fanaticism of the secularists," pointing to controversial court rulings, opposition to displays of the cross on public property and a push by scientists to replace the Anno Domini dating system with the Common Era system.

He said the "constant secular pressure" guided him to embrace Catholicism.

"Callista and I have two grandchildren," he explained. "The more I thought about the culture they are surrounded by and the direction of that culture's evolution, the more troubled I became. The more I looked at this historic phenomenon, the more I had to come to grips with my own beliefs and my own tolerance of the increasingly aggressive secularization of our country."