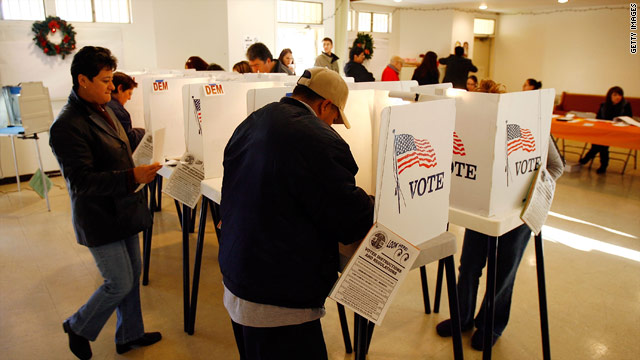 An analysis of new Census Bureau data by the Pew Hispanic Center, a project of the Pew Research Center, indicates that more than 6.6 million Latinos cast ballots in last year's midterm elections, an increase of around one million from the 2006 midterms. Latinos represented 6.9 percent of all voters last year, up from 5.8 percent in 2006.

The Pew Hispanic Center report indicates a rapid population growth appears to behind the increase in Latino voters, pointing to Census Bureau numbers that 50.5 million Hispanics were counted last year, up from 35.3 million in 2000, with the number of Latino eligible voters jumping from 13.2 million in 2000 to 21.3 million last year.

But even with a record number of Latinos voting last year, their representation among all voters remains below their percentage of the general population. The report points out that, according to 2010 Census numbers, 16.3 percent of the nation's population was Latino, but only 10.1 percent of eligible voters and fewer than 7 percent of voters were Latino.

"This gap is driven by two demographic factors-youth and non-citizenship," writes Mark Hugo Lopez, Associate Director, Pew Hispanic Center. "More than one third of Latinos (34.9 percent) are younger than the voting age of 18. And an additional 22.4 percent are of voting age, but are not U.S. citizens. As a result, the share of the Latino population eligible to vote is smaller than it is among any other group."

The low voting representation could rise in the future, as more Latinos turn 18 and become voter eligible.