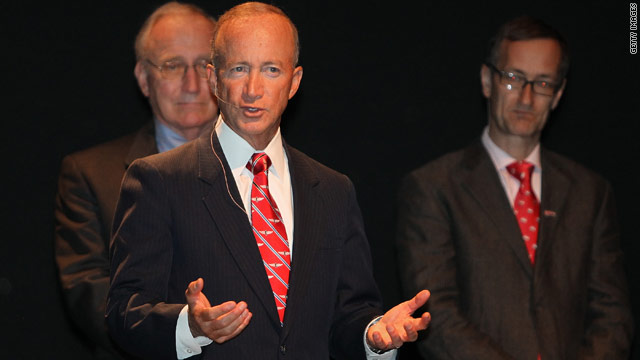 Daniels: No presidential decision yet

Washington (CNN) - Indiana Governor Mitch Daniels says he still has not decided whether he will be running for the GOP presidential nomination.

On the timing of when his decision would be announced he told the Indianapolis Star Thursday don't expect it this weekend. "It absolutely won't be [this weekend] because you can't announce a decision you haven't made."

Daniels has repeatedly said he would make his intentions known after the state legislature's session ends, which is Friday. He told the paper he will not keep people waiting for much longer but also won't rush it.

"The time to work on it is here," he said. "I feel some responsibility not to just keep them dangling," talking about his supporters who are urging him to enter the GOP presidential sweepstakes.
As he mulls his future, right now the governor is contemplating whether to sign a bill that would cut off much of the federal funds that goes to Planned Parenthood's activities in the state and also would place tighter abortion restrictions there.

House Bill 1210, now on Daniels' desk after passing both houses of the legislature, would reject about $2 million of the $3 million in federal money the group receives in Indiana for preventive health services for women, including birth control, breast and cervical cancer screenings and other tests. Proponents of the bill have said they don't want federal money going to an organization that performs abortions, but federal law prevents its money to go for abortion services.

It is a controversial bill and puts Daniels in a tough spot. He has called for a "truce" on the pushing of social issues as he thinks more of the national emphasis should be put on fighting the nation's mounting debt, which he has said is crippling. The governor however has also a strong record of opposing abortion rights.

Proponents of the Planned Parenthood measure tell CNN they are hopeful he will end up supporting it. "I am confident that he will sign it, and I think it is the right thing for him to do," says Republican Indiana State Rep. Scott Schneider. He says it is the "right thing to do whether he is running or not. It is good public policy for Indiana."

Citing Daniels' record as an opponent of abortion, Mike Fitcher, president of Indiana Right to Life, says "certainly signing the bill will solidly establish his pro-life credentials on the national stage, but I don't think that will be the deciding factor."

If signed, this would be the first successful bill by a state to reject federal funds for Planned Parenthood. Three other states are also considering similar ones: North Carolina, Texas and Kansas.

Meanwhile the group and Democrats in the state are lobbying Daniels to reject the legislation.

"It's time for Governor Daniels, who called for a truce on social issues, to stay true to his word. As he promised, Governor Daniels should fix the economy and veto this bill that is driven by a clear social agenda and will cost the taxpayers of Indiana money," says Cecile Richards, president of Planned Parenthood Federation of America, in a statement.

The group also believes the bill would cost the state about $4 million separately in federal Medicaid dollars because the state could separate out which organizations could offer services to their patients.
The measure would also restrict access to abortions at 20 weeks. Five states now have a similar restriction.

"Hoosiers are angry, and they are making themselves heard," Planned Parenthood of Indiana President Betty Cockrum says.

Daniels has 3 options: sign the bill, veto it or if he does nothing over the next seven days then it will automatically become law.