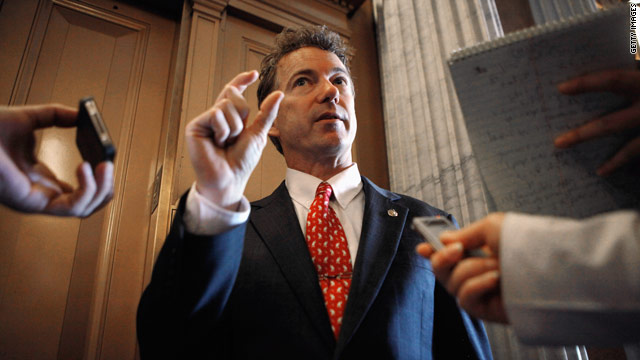 Washington (CNN) - While real estate mogul Donald Trump continues to raise doubt over Obama's presidential credentials, Republican Sen. Rand Paul of Kentucky questioned Trump's legitimacy, not as an American, but as a Republican.

"Seriously don't you think we need to see that?" Paul said, according to media reports.

The White House released Obama's birth certificate on Wednesday, after questions about the president's birthplace were repeatedly raised, most recently by Trump.

Records obtained by CNN earlier this week show that Trump changed his party registration three times over the past 20 years and did not cast a vote in the 2002 general election.

According to media reports, Paul's speech centered around concern that attention garnered by GOP candidates like Trump, distracts from pertinent discussions about the deficit and economy.

"Let's look to Republicans who not only talk the talk but walk the walk," Paul said. "If we find the right candidate I see no reason why we can't win in 2012."

Paul recently toyed with the idea of joining the pack of Republicans contending for the 2012 presidential bid, until his father, Rep. Ron Paul of Texas announced his exploratory committee earlier this week.

"He's my landlord in Washington. Can you imagine the family strife if we ran against each other?" Paul said according to media reports. "I'm afraid that I could be kicked out of my apartment."