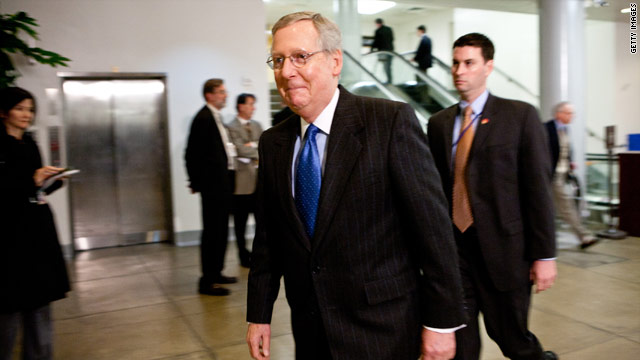 Washington (CNN) - A day after Senate Democrats announced they would force a vote on an House-passed Republican budget for next year that makes dramatic changes to Medicare - in order to test if Senate Republicans really support it - Senate GOP Leader Mitch McConnell said he would force a vote on President Obama's competing budget proposal to see if Democrats actually back the president's plan.

"We'll give our colleagues an opportunity to stand with the President in failing to address the problems facing our nation while calling for trillions in new spending, massive new debt, and higher taxes on American energy, families and small businesses across the country," McConnell said in a statement.

"This is little more than a stunt to distract from the fact the Senate Republicans will soon have to put on the record whether they support the House Republican plan to kill Medicare as know it," said Jon Summers, a spokesman for Senate Majority Leader Harry Reid. "They're afraid of this vote and, given how they are getting an earful in their districts, it's easy to understand why."

The back and forth over the competing budget proposals comes as lawmakers and the White House maneuver to try to reach a broad deal in the coming weeks that would raise the nation's debt limit, put in place reforms to eventually lower the debt, and fund the government next year.

Reid said Wednesday he would schedule a vote on the House budget sometime shortly after Congress returns from spring recess next week, but he has not set a date.