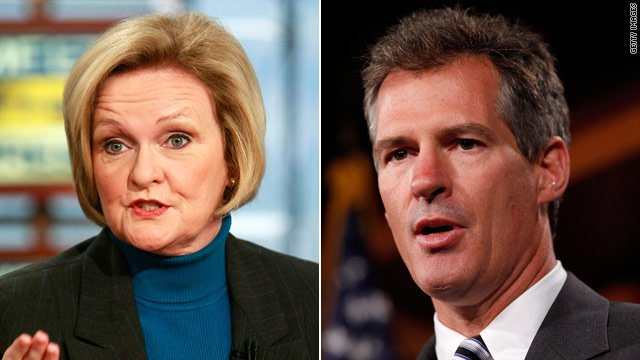 "Senator McCaskill voted to block EPA's implementation of the Clean Air Act and allow big companies to continue pumping unlimited amounts of carbon dioxide pollution into the air for at least another two years," states one, while the other declares, "Sen. Brown voted for legislation that would stop the EPA from making badly-needed updates to clean air safeguards to protect public health from carbon pollution."

The Senate voted on a series of amendments in April that would limit or block the Environmental Protection Agency's ability to regulate greenhouse gas emissions, but none of the amendments passed.

Both ads question the consequences that each vote would have had on a child with respiratory problems, had the amendments passed. In Boston, a child appears wearing an oxygen mask as viewers are told, "When Scott Brown voted to eliminate clean air standards that reduce smokestack and tailpipe emissions just imagine what it could've done – to her."

Brown won a special election in 2010 to fill the late Sen. Ted Kennedy's Massachusetts seat. Both he and McCaskill are up for re-election in 2012 and will engage in campaigns that are expected to be both close and contentious.

Sen. Brown fired back at the ad in a statement, saying, "This ad reeks of political demagoguery and exposes the League of Women Voters as nothing more than a pawn in the Massachusetts political machine. It is outrageous for an allegedly non-partisan group to use sick children to misrepresent a vote about jobs and government over-regulation. These type of over-the-top distortions have no place in our political discourse."

But League of Women Voters President Elisabeth MacNamara said Friday, in a statement, “It’s really a shame that Senator Brown does not understand that clean air is a public health issue. Children, adults and seniors are harmed every day by air pollution."

"Senator McCaskill, a Democrat, and Senator Brown, a Republican, voted to block new clean air standards and put the public health at risk by undermining the Clean Air Act," she continued. "The ads we are sponsoring in Missouri and Massachusetts are designed to spark a discussion about votes that let polluters off the hook and put our children at risk."

Sen. McCaskill's office had no comment on the ad.

The League of Women Voters spent $1.4 million dollars on television and online ads in Boston, with $1.2 million targeted for TV advertisements. Ads in Jefferson City and St. Louis cost about $400,000.