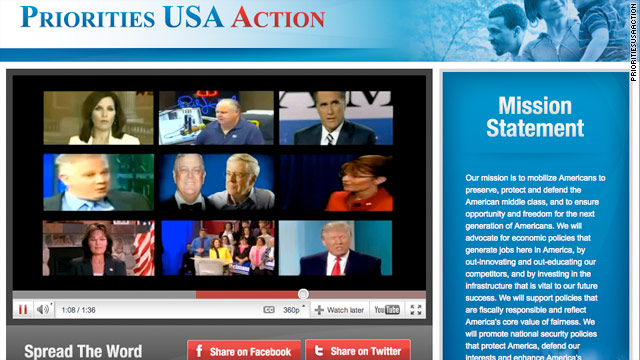 New independent group has got Obama's back

Washington (CNN) - Saying it's time "fight back," Democrats with strong ties to President Barack Obama are unveiling a double-fisted fundraising push to counter an expected tidal wave of money from independent GOP-leaning groups in the 2012 battle for the White House.

Organizers say the two groups launched Friday, Priorities USA and Priorities USA Action, aim to raise a combined $100 million to defend the president from what they say will be a flood of attack ads from similar independent groups on the Republican side.

But the strategy of using unlimited and sometimes secret contributions is something that Obama opposed in the past.

"This is an effort to level the playing field. Americans deserve an honest debate about job creation, the economy, national security and education. That debate will never happen if only right wing extremists are engaged on the battlefield," says Sean Sweeney, one of the two organization's senior strategists.

Sweeney and Bill Burton, the groups' other senior strategist, recently departed the White House. Sweeney was a senior adviser to former White House Chief of Staff Rahm Emanuel and Burton was a deputy White House press secretary and before that national press secretary for Obama's presidential campaign.

"While we agree that fundamental campaign finance reforms are needed, Karl Rove and the Koch brothers cannot live by one set of rules as our values and our candidates are overrun with their hundreds of millions of dollars. We will follow the rules as the Supreme Court has laid them out, but the days of the double standard are over," Burton said.

Rove, the top political adviser to former President George W. Bush, was one of the founders last year of American Crossroads and Crossroads GPS, along with former Republican National Committee chairmen Ed Gillespie and Mike Duncan. The two independent groups raised more than $70 million in last year's midterm elections and say their goal is to raise $120 million in the 2012 election cycle.

American Crossroads is a 527 organization that must disclose its donors. Crossroads GPS is a 501(c)(4) group, which is not required to disclose its contributors. Last year Democrats, including the president, criticized Crossroads' efforts for accepting funds from undisclosed donors.

Obama highlighted the issue on the campaign trail last fall. At a rally in Madison, Wisconsin last September, Obama said Republicans were being helped "by special interest groups that are allowed to spend unlimited amounts of money on attack ads. They don't even have to disclose who's behind the ads. You've all seen the ads. Every one of these groups is run by Republican operatives."

A few days later at a rally in Philadelphia he added that "the American people deserve to know who is trying to sway their elections."

A spokesman for American Crossroads says Friday's move makes the president a hypocrite.

"Obama's brazen hypocrisy, in encouraging his own operatives to start groups exactly like the ones he demagogued last year, shows how cynical this President can be when it comes to perpetuating his own power," American Crossroads communications director Jonathan Collegio tells CNN.

But the White House says they don't "control outside groups."

"These are not people working for the administration," White House Press Secretary Jay Carney told reporters Friday, adding that "the president's position on disclosure remains the same."

Two top players who helped fund some of the Republican independent committees last year were Charles and David Koch, who own a large energy firm. Friday's press release from Priorities USA says "the Koch brothers have pledged to raise and spend $88 million over the course of the next two years."

Paul Begala, a top political adviser in the Clinton White House, who will serve as a senior strategist for Priorities USA and Priorities USA Action, said "It's time somebody decided to stand up and fight back."

"In 2010 progressives stood by and watched Karl Rove and the billionaire Koch brothers practice the politics of lie and buy, fear and smear. We're not going to let them get away with it any more. We are committed to defending the American middle class against the Rove-Koch assaults." Begala is also a CNN contributor.

The new groups are being set up in a similar fashion as the two Crossroads organizations, with Priorities USA is being organized as a 501(c)(4) group, which means it does not have to disclose the names of its donors. The new groups' launch was first reported by Politico.

The explosion of political ad spending by independent groups last year can be traced to a January 2010 Supreme Court decision. "Citizens United vs. the Federal Election Commission" allowed corporations and labor unions to make unlimited donations to some political groups, but continued to ban them from giving to candidates and party committees.

While Republican-leaning groups took the lead in last year's midterm contests, Democratic-leaning groups appear to be catching up this year, with the recent creation of organizations to help defend the party's Senate majority and to help try and recapture control of the House.