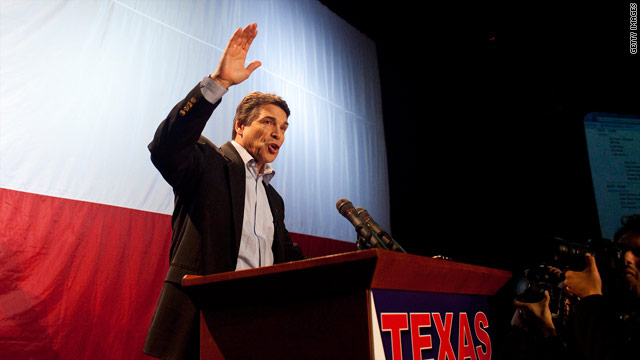 "You see hundreds of thousands of acres of Texas burning and you know that there will soon be emergency declarations, and we did that now a couple of weeks ago, but still no response from this administration," he told local news radio station WOAI in an interview.

Perry requested a federal declaration for emergency in Texas on April 16 after destruction from wildfires reached 252 counties in the state. An emergency declaration from the president would clear the path for federal aid to Texas.

Obama approved GOP Gov. Robert Bentley's request for emergency federal assistance in Alabama on Wednesday, the same day it was requested, after a wave of tornados ripped through the state. According to FEMA, emergency declarations are made when "an incident is of such severity and magnitude that effective response is beyond state and local capabilities and that federal assistance is necessary."

Obama visited Tuscaloosa, Alabama Friday, touring damaged regions of the city. He pledged the federal government would "do everything we can to help these communities rebuild."
"I've never seen devastation like this," the president said.

But Perry aired his frustration over what he perceives as a lack of needed attention to Texas, venting, "They watch TV, they know what's going on here, they can recognize that there is going to be a request for assistance, a request for help."

Perry protested what he views as a lack of response from President Obama 13 days after his request for emergency funds, though federal agencies such as the National Park Service have supplied firefighters to support the state.

"There is a point in time where you say, hey, what's going on here. You have to ask why are you taking care of Alabama and other states? I know our letter didn't get lost in the mail."

But an administration official with knowledge of federal assistance provided to Texas tells CNN the state has been already been allocated 16 fire management assistance grants that provide financial support for the specific purpose of fighting fires. Texas has been approved to receive six more grants of this kind to aid state and local governments with firefighting efforts that include equipment, field camps, mobilizing and demobilizing activities. The most recent fire management grant was approved Wednesday.

Perry has also charged Obama with punishing Texas for his open opposition to administration-led reform on health care and the environment, a charge which the president has denied.

Rachel Racusen, a FEMA spokesperson said, "Our thoughts and prayers are with the families and communities continuing to be affected by the wildfires in Texas. Governor Perry's request is currently under review, and we will continue our close coordination with the state as they work to protect their residents and communities."

White House spokesman Nick Shapiro contested Perry's claims of neglect, saying, "The administration has greatly been assisting Texas with the fight against the wildfires."