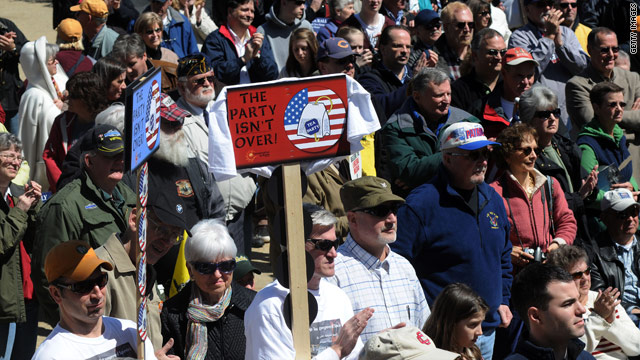 (CNN) - The Tea Party movement has grown more unpopular among Americans with nearly half now seeing it in an unfavorable light, according to a new poll. The sentiment will be closely watched by both sides of the aisle for its potential influence as the 2012 presidential campaign gears up.

According to a new USA Today/Gallup poll, 47 percent of Americans view the Tea Party movement in an unfavorable light while 33 percent hold a favorable view.

Sixty percent of Republicans support the Tea Party while 73 percent of Democrats feel negatively towards the movement.

The 14-point gap between the parties is the largest since Gallup started following American views of the Tea Party in March of 2010. At that point, 40 percent of Americans had an unfavorable take on the group while support was at 37 percent.

Results of a CNN/Opinion Research poll conducted in March found the same sentiment as the new Gallup poll. Forty-seven percent of all responders viewed the Tea Party in an unfavorable light, a rating that had dropped five points since December.

The Tea Party originated in early 2009 as a protest movement against the Troubled Asset Relief Program and in opposition of the federal stimulus plan passed through Congress the same year. Tea Party activists helped Republicans gain back control of the House during the midterm elections and the grassroots movement built a strong base during the past two years.

The USA Today/Gallup poll surveyed 1,013 adults by telephone from April 20th to the 23rd and has a sampling error of plus or minus 4 percentage points.

The CNN poll surveyed 1,023 American adults by telephone from March 11th to March 13th, with a sampling error of plus or minus 3 percentage points.