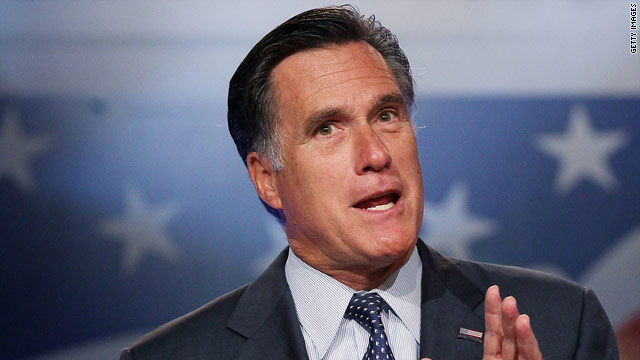 It happened as Romney was speaking at a forum on job creation and spending last night in Manchester, New Hampshire, sponsored by Americans for Prosperity.

Using a commonly-said phrase as he was discussing the economy, Romney told the crowd, "You remember during that during the Ronald Reagan/Jimmy Carter debates, that Ronald Reagan came up with this great thing about the 'misery index' and he hung that around Jimmy Carter's neck and that had a lot to do with Jimmy Carter losing. Well, we're going to have to hang the 'Obama Misery Index' around his neck. And I'll tell you, the fact that you've got people in this country really squeezed, with gasoline getting so expensive, with commodities getting so expensive, families are having a hard making ends meet. So we're going to have to talk about that, and housing foreclosures and bankruptcies and higher taxation."

But Romney then said, "We're going to hang him with that, uh, so to speak – metaphorically. You have to be careful these days. I learned that."

Romney did realize the wording immediately, stopping to clarify his comment. He had a slight smile and there was some laughter in the room that seemed to be playing off his reaction, not the original comment.

A Romney spokesman, Andrea Saul, said in an e-mail to CNN of any question over the comment, "It is not what the governor meant and that was very clear in what he actually said. It's a ridiculous exaggeration of his actual comments."