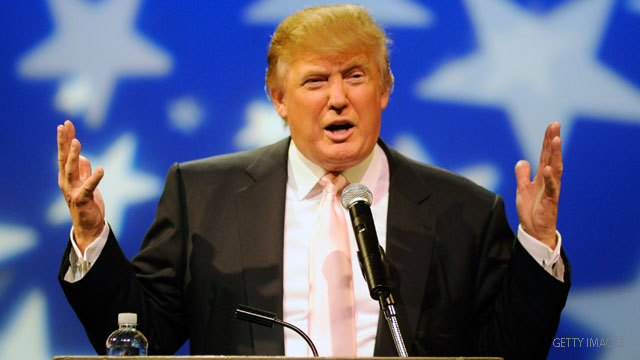 Washington (CNN) - The so-called "birther" controversy championed by Donald Trump may have been largely put to rest this week with the release President Barack Obama's long-form birth certificate, but the real estate mogul's name remained on the tips of Washington tongues Sunday.

Axelrod said it was the media, not Trump, that chose to run with the "birther" story and that the ultimate release of the birth certificate was a message to journalists and "anybody else."

When Obama released the document Wednesday, he chided the press for its coverage of the movement instead of America's economic obstacles, saying "we do not have time for this kind of silliness."

"I'm happy that we could contribute to Mr. Trump's self-image, that he feels good about himself," Axelrod said of the famously confident entrepreneur.

Former GOP 2008 presidential candidate McCain said Obama will not succeed in making Trump the face of the Republican Party, adding there are "serious candidates" in the race for the White House in 2012.

"Mr. Trump is having a lot of fun and it's pretty clear he enjoys the limelight," McCain said on CBS' "Face the Nation," adding: "All of this is so unnecessary."

Graham was particularly critical of Trump's profanity-laced speech Thursday in Las Vegas, Nevada, saying that rhetoric is not the way to win over South Carolina voters.

"Most Americans don't want their president going around saying the 'f-word,'" Graham said on "Fox News Sunday." "There's a lot of things Mr. Trump can be proud of, but some of his rhetoric and this focusing on the president's birth, I do not think is the way for us to win the White House."