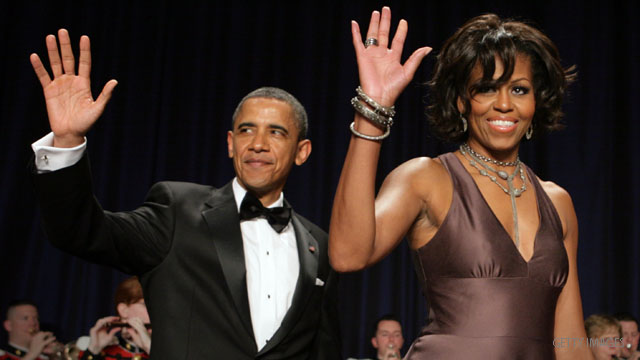 Washington (CNN) - Donald Trump reacted to the onslaught of jokes about him by President Barack Obama and comedian Seth Meyers at the White House Correspondents Association Dinner Saturday with his own view of the events.

Click to watch video
At the event, Obama made light of Trump’s repeated calls for him to release his birth certificate, something he did Wednesday, and Meyers made fun of everything from his hair to his presidential ambition. Although Trump appeared unamused during Saturday’s dinner, he said he was honored “in a certain way” to be a focal point.

“I really knew what I was getting into last night. I had no idea it would be to that extent where, you know just joke after joke after joke,” the mogul said. “It was almost like, is there anyone else they can talk about?”

He also found the event “inappropriate in certain respects” and spent the evening thinking about how “the American people are really suffering and we’re all having a good time.”

And what was his assessment of Meyers’ comedic timing?

“His (Meyers) delivery was not good. He’s a stutterer and he really was having a hard time,” Trump said of the “Saturday Night Live” star.

When asked about a recent profanity-laced speech in Las Vegas Wednesday Trump said he probably won’t use that language anymore, but that it pales in comparison to the rhetoric in “real negotiations.”