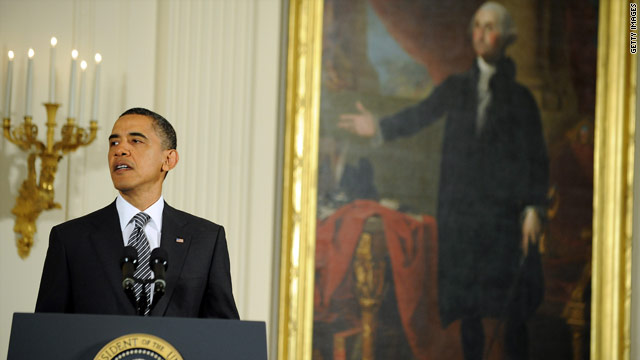 How much will bin Laden's death impact Obama's re-election?

Washington (CNN) - OK. Let's start with the obvious. President Barack Obama's announcement that Osama bin Laden has been killed is likely to provide an immediate boost to the president's poll numbers.

But not so obvious is whether Sunday night's news that the al Qaeda founder and leader was shot and killed by U.S. special operations forces during a raid in Pakistan will affect the 2012 presidential campaign.

Obama's approval rating among Americans is currently in the mid to upper 40's, according to the most recent national polls. Most political observers expect an immediate bounce.

"Sunday night was the best of the Obama presidency, injecting a much needed boost into his credibility as a leader," writes David Gergen, a senior political analyst for CNN and an adviser to four U.S. presidents, including both Democrats and Republicans. "Obama now walks taller, both at home and overseas."

When it comes to recent polling, foreign affairs was one of the few bright spots for Obama. The president's approval rating for foreign affairs stood at 54 percent, compared to 41 percent for health care and 39 percent for the economy, according to a CNN/Opinion Research Corporation national survey conducted in January.

The news of bin Laden's death should boost those numbers as well as the president's image as a strong and effective leader.

"Strong leadership. That's perhaps the most important attribute for a president to have. And because this president doesn't scream and yell and pound his fist on the table, his critics underestimate his strength. Never again," says Paul Begala, a Democratic strategist and CNN Political contributor.

"In October of 2008, he said five words: We will kill bin Laden. He made that pledge in his very quiet 'Gary Cooper High Noon' style and now he's kept that pledge," adds Begala, a top political adviser in the Clinton White House who is now serving as a senior strategist for Priorities USA, a newly formed independent group which is raising money to defend Obama from attacks from Republicans during the next campaign.

Republicans agree that there will be at least a temporary boost for the president.

"In the short-term, yes. Yesterday was a great day for the nation. We are all rightly celebrating and politics isn't, and shouldn't, be a part of the equation," Doug Heye, a GOP strategist and former communications Director for the Republican National Committee, tells CNN.

But just how long will the bounce last?

"But the bounce in his approval ratings, which is the most heavily watched indicator for a president's clout, was short-lived," says CNN Polling Director Keating Holland. "While President Bush's numbers stayed in the mid 60's through January 2004, it was down to around 50 percent by February. Saddam's capture is probably the closest historical analogy we can draw, but because it occurred so close to the start of a presidential campaign, it may not provide good guidance for the length of any bounce President Obama picks up today."

In the short term, criticism by many of the probable and possible 2012 Republican presidential candidates of how the president is handling foreign affairs may diminish. But that is unlikely to continue in the long run once the campaign heats up. Many of these likely GOP contenders for the White House have attacked Obama's responses to the unfolding events in Egypt, Libya and Yemen the past three months.

GOP strategist Heye notes that "several of the candidates praised the president."

"I want to congratulate America's armed forces and President Obama for a job well done," said Pawlenty, in a statement, late Sunday night

"This is a great victory for lovers of freedom and justice everywhere. Congratulations to our intelligence community, our military and the president," wrote Romney a few minutes later.

"I want to personally congratulate President Obama and the men and women of the Armed Forces for a job well done," added Trump Monday morning.

But Heye says the killing of bin Laden doesn't give the president carte blanche on national security and defense issues: "There are still many foreign policy issues we face and how the administration handles them, and how the candidates would handle them, will be part of the discussion."

In the end, this temporary focus on national security and foreign affairs will most likely disappear, and the spotlight should return to the economy, jobs, gas prices, the deficit, and the budget battles.

"This will certainly be a peak for President Obama. But you know what happens after the peak, the fall. After this peak will come the economy. Remember George Bush 41. Now that we've put a period at the end of a very long sentence, we move on to the next sentence, and that is the economy," says Republican strategist and CNN contributor Alex Castellanos.

"Nothing is more dangerous in politics than success. Ask Winston Churchill. Foreign policy successes have never led to political success. Foreign policy success leads to the next problem. For Obama that's the economy," adds Castellanos, who was a top media adviser to the 2004 Bush-Cheney re-election campaign and to Romney's 2008 bid for the GOP presidential nomination.

Churchill was a war hero during World War Two but the British prime minister was bounced out of office soon after the end of the conflict.

President George H.W. Bush may be the more relevant example for Obama. While Bush's approval rating skyrocketed following the defeat of Iraqi forces in early 1991 in the Persian Gulf War. But as the focus shifted from the war to tough economic times, Bush's numbers began to slide. By October, 1992 it was in the 30s, and he won 38 percent of the vote that year, in his re-election loss to then Gov. Bill Clinton of Arkansas, the Democratic challenger.

But history may not repeat itself. The situations are different and Obama is considered to be a much more gifted politician than the elder Bush.

One thing is almost certain. A sense of bipartisanship and unity may be short-lived.

"Let us think back to the sense of unity that prevailed on 9/11," the president said Sunday night as he announced the killing of bin Laden.

Such bipartisanship didn't last that long after the terrorist attacks in 2001, history will most likely repeat itself this time around.